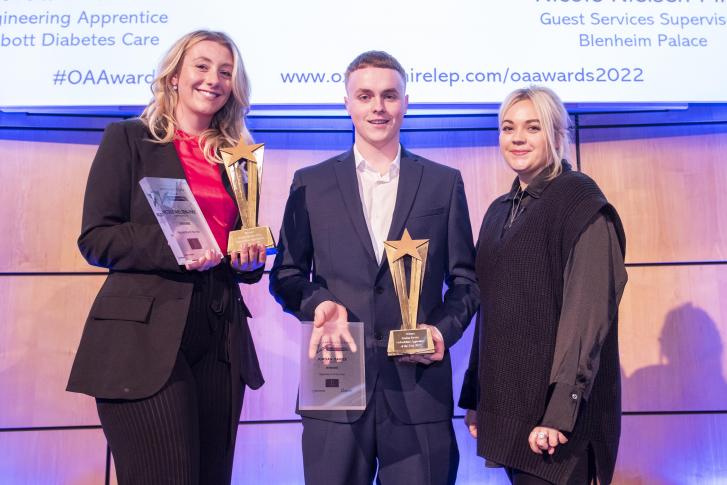 The Oxfordshire Apprenticeship Awards 2022 recognised the best talent in the county with a special live-streamed event on Thursday 19 May, followed by an in-person celebration evening at Williams F1 Conference Centre on 26 May, where finalists were presented with their trophies.

The Apprentice of the Year Award was won jointly by Jordan Davies, an Engineering Apprentice at Abbott Diabetes Care in Witney and Nicole Nielsen-Pike, Guest Services Supervisor at Blenheim Palace. Both winners said they were ‘speechless’ when they heard the news, but are now busy sharing their stories to inspire the next generation as OxLEP Skills Apprenticeship Ambassadors.

Jordan and Nicole took part in the launch of the Oxfordshire Apprenticeship Awards 2023, which took place at the OxLEP Annual Event on 1 November. Having experienced how great it felt to win, they are encouraging employers to put their apprentices forward for an award to recognise their achievements and show them how much they are valued. 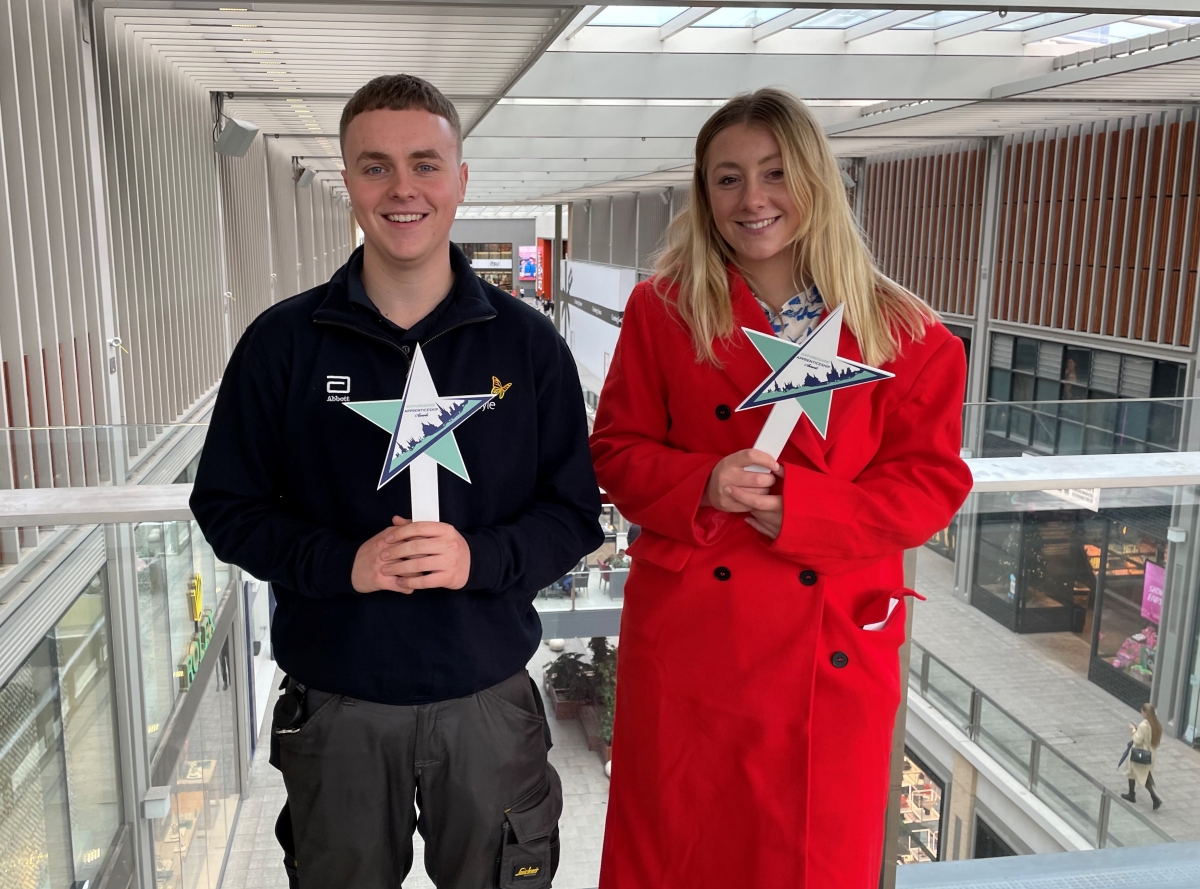 Jordan won the Advanced Apprentice of the Year award, which was sponsored by Oxford-based market research company NielsenIQ.

Erin Fullarton, HR Officer at NielsenIQ, said: “We chose Jordan as our winner because we were inspired by his motivation and passion for his job as an engineer. Jordan has used this passion to successfully take part in and lead on projects that have a major impact to the company by making drastic cost savings. Whilst doing a great job day to day, Jordan also manages to make time to ensure he is a great mentor to some of the younger apprentices within the company. Not only did we love sensing the pride when Jordan spoke about his job but we had the pleasure of learning about how he won an “outstanding skills and attitude award” from college in his first year – which gives credit to his hard work and determination, making Jordan our deserving winner.”

Jordan said: “When I was told I had won I was in complete shock. To reach the final was amazing, I never believed I would be fortunate enough to be selected from the finalists and to then learn I had become joint winner for the apprentice of the year award, I was speechless. What a great achievement this is for me and a great opportunity to voice to new apprentices on the many opportunities there are for apprenticeships.”

Nicole won the Higher/Degree Apprentice of the Year award, which was sponsored by Oxfordshire Advanced Skills (OAS), a training provider offering high quality training for apprentice engineers and technicians at technology businesses in the Thames Valley.

Emma Johnstone, Operations Manager at OAS said: “It was clear to see the passion she has for apprenticeships. She is a great advocate of the opportunities they provide, having been on one from leaving school and working up though the different levels. Nicole has achieved a lot during her apprenticeship and seeks to improve areas within the business, taking an active role in wellbeing as well as supporting other apprentices. Nicole’s story about how she got to where she is and all the extra things she does with mental health and accessibility just pipped it for me!”

Nicole said: “When I won the awards, it felt so surreal. All the other finalists were amazing, I was very overwhelmed and speechless. It is a real honour to be recognised for my achievements.”

Jordan and Nicole were selected as overall winners from the winners of the four apprentice categories by Chloe Penniston, a Trustee of the 2022 headline sponsor, The Fiona Wheeler Charitable Foundation. The Foundation was established in memory of Fiona Wheeler, co-founder of west Oxfordshire based boutique client law firm The Burnside Partnership. Fiona sadly died in December 2019 aged only 35 after a long and courageous battle with illness.

It was a very difficult task for Chloe, since all the finalists were exceptional. She just couldn’t choose between Jordan and Nicole, so decided to award them both [pictured above].

Chloe said: “Jordan has shown great motivation and passion for his job as an engineer. He has made a big impact to the company he is working for and is a great mentor to the younger Apprentices within the company. Jordan is a true advocate for an apprentice, having not only impressed us but also his teachers in his first year at college having won an award for “outstanding skills and attitude”.

“A massive congratulations to Jordan and Nicole and to all of the apprentices. Each of you should be incredibly proud of everything that you do!”

About the Oxfordshire Apprenticeship Awards 2023

If you would like the opportunity to support the Awards, please get in touch.

Join us for Oxfordshire Apprenticeships Hour (#OAHour) on Twitter @OxonApprentice from 13:00 every Thursday for latest on the Awards and join in the conversation using the hashtag #OAAwards2023.