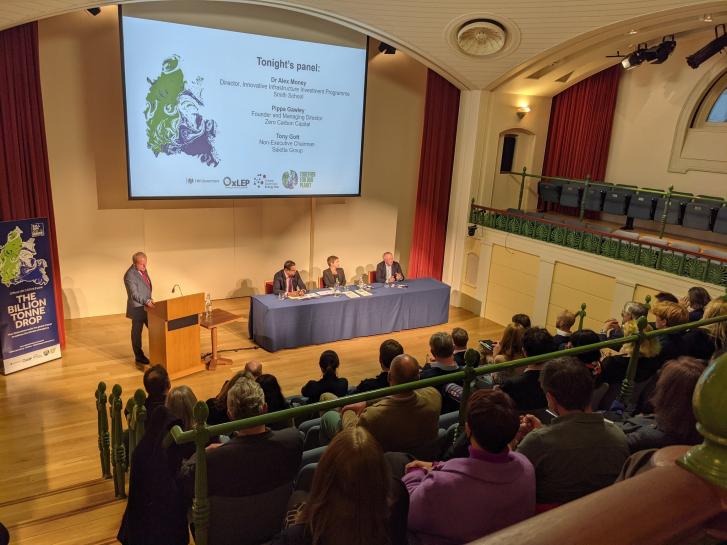 OxLEP showcased how – with the right level of investment – Oxfordshire is well-set to ‘do more’ and create solutions on a global scale that drive the world towards a zero-carbon future.

As key officials from across the globe continue critical discussions in Glasgow at COP26, the Oxfordshire Local Enterprise Partnership (OxLEP) has played its role during the second week of the major climate change conference, hosting an official COP26 event of its own.

OxLEP’s programme was built around a ‘billion tonne drop’ theme, showcasing how the county’s world-leading innovation ecosystem can generate major global carbon emission savings through the significant capabilities generated within Oxfordshire, including in the fields of fusion energy, solar power, construction, electric vehicles and aviation.

The COP26 event also explored how the county’s expertise could be scaled-up, at pace, and ultimately benefit the global fight against climate change.

Supported by a powerful, short-film that showcased some of Oxfordshire’s key projects that have the ability to play a significant role in creating a greener future globally, the event saw a number of key figures from the world of business, academia and green finance come together to discuss how:

Rob Panting – Communications Manager at OxLEP – said: “Our official COP26 event gave us an unprecedented platform to demonstrate the world-class capabilities that we have within Oxfordshire to support a zero-carbon future globally.

“Oxfordshire has a history of delivering pioneering solutions to the world’s greatest issues and we believe that the expertise and desire that exists in the county can be a critical driver to delivering the solutions that can tackle the climate emergency, and at pace too. We therefore hope that our COP26 event was able to amplify this message far-and-wide and result in an even greater awareness of our stand-out innovation ecosystem.”

In Oxfordshire – prior to the pandemic – the low-carbon energy sector generated £1.15bn a year and over the past half-decade, the county has attracted £2bn in foreign direct investment in this area.

The Oxfordshire Energy Strategy – which was launched in November 2019 and led by OxLEP, with support from both the private and public sectors – backs a drive towards zero-carbon growth by 2050 with the aim of spearheading a further £1.35bn annually to the county’s economy, creating at least 11,000 new jobs in the low-carbon sector by 2030.

Find out more on COP26