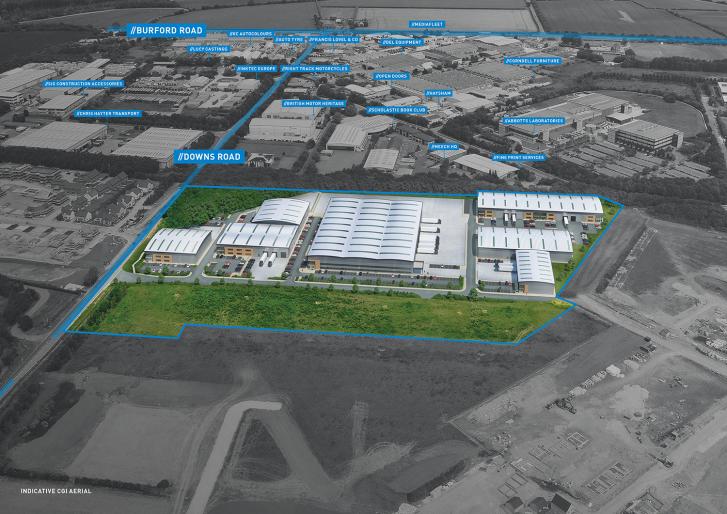 Venture Engineering will use the 15,000 sq ft building for its globally-renowned motorsport engineering and fabrication company which is currently based in Bourton-on-the-Water in Gloucestershire.

Tungsten Park Witney is a 24-acre project to the west of Witney, 500 metres from the new A40 junction which provides easy access to Oxford and the surrounding area. Tungsten Properties is constructing a new 490,000 sq ft business park.

Unit 7 is currently under construction with completion due in March 2021.

Venture Engineering was established in 2015 by its three owners and in the last five years has rapidly expanded. It is an in-house design and fabrication of motorsport race parts company that allows the top race teams to maintain their competitive edge. Customers are in Formula 1 and the Le Mans 24h race, amongst other series, and include Rofgo, Aston Martin, Ford, Haas F1 Team, Redbull F1, Williams F1, Prodrive, Noble Automotive and Duncan Hamilton Rofgo.

Adrian Perkins, Director of Venture Engineering said: “The move from Bourton-on-the-Water to Witney will aid the expansion of our business. Moving into Motorsport Valley and being near to the M40 are key to our plans. Tungsten Park was chosen as the area was perfect but also the build quality and relationship built with Tungsten over the past six months made our decision very easy. While motorsport is our background, we are gradually moving into other sectors including transport, battery power, architectural, automotive to name but a few, so this move to Witney will help us quickly achieve our growth goals.”

The deal is the third for Tungsten Park Witney and has taken the total space pre-let or sold to 162,000 sq ft, equating to circa 56% of phase 1. In March 2020, it was announced that Meech International, one of the world’s leading manufacturers of static control, web cleaning and compressed air technology which is headquartered in Witney, had taken Unit 2 totalling 22,000 sq ft for additional R&D and production space, and in November 2019, Witney-based swimming pool equipment manufacturer Certikin International took 125,000 sq ft for its new HQ at Unit 4.

David Mole, Associate Development Director at Tungsten Properties, said: “A warm welcome to Venture Engineering to Tungsten Park Witney. They will be joining a business community that is being built to cater for those companies which are experiencing business growth and looking for new, state of the art warehouse space. To have secured three businesses at our new project shows the strength of Witney as a business location in Oxfordshire.”

Tungsten Properties’ total warehouse space currently under construction totals 600,000 sq ft, out of a committed pipeline of 1.65 million sq ft with a gross development value of £186 million which will create new workspace for hundreds of new jobs.

Tom Barton of VSL added: “This is the first new large unit development scheme in Witney for over 15 years and provides some much-needed quality buildings to a growing market. With the development offering not only lease opportunities but freehold buildings, this has proven an attractive option to companies such as Venture Engineering as there are currently no other sites in the A34 market that offer freeholds for similar sized units.”

Jon Silversides, Partner at Carter Jonas, said: “Securing another key occupier for the scheme at the outset of development underlines the strength of Oxfordshire’s commercial market and points to underlying optimism in the county’s future.”

Carter Jonas and VSL acted on behalf of Tungsten Properties.