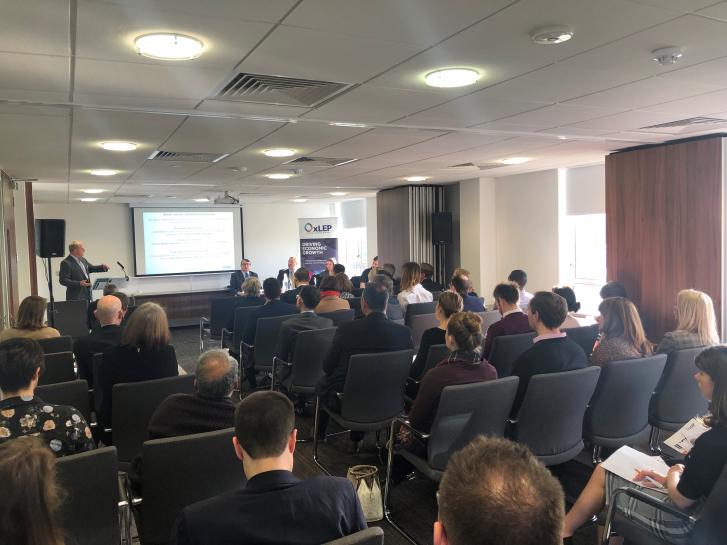 Around 50 business leaders from across Oxfordshire came together this morning (19 February) at OxLEP's latest Q&A event, discussing the potential impact Brexit will have on the county’s business community.

The debate was the latest in a series of Q&As led by OxLEP, bringing together the county’s business people to discuss key aspects of the economy. Previously, Q&As have focussed on areas such as recruitment, connectivity in Oxfordshire and what the county offers in terms of ‘place-making’.

This morning’s event – which was held at Knights plc in Oxford – focussed on ‘Brexit and the Oxfordshire economy’, with panellists including; Nigel Tipple – OxLEP’s chief executive, Bruce Potter – partner at Blake Morgan and Victoria Spires – senior associate at Penningtons Manches.

The event was chaired by radio presenter Howard Bentham.

The Q&A followed a survey – jointly-led by OxLEP and B4’s ‘Oxfordshire Voice’ – published last month which saw members of B4 respond to a series of Brexit-related statements.

In it, survey respondents stated whether they agreed or disagreed with statements, covering several Brexit topics including; if leaving the EU was good for their business, whether or not Government had been communicating effectively with business on Brexit matters, as well as what Brexit might mean for future recruitment plans.

Only 13 per cent of respondents felt that their business would be better-off as a direct consequence of the UK’s EU withdrawal, with over two-thirds (71 per cent) disagreeing, saying that the move would not benefit their business.

Read more on the survey

Following the survey, Nigel Tipple said: “As discussions on the UK’s withdrawal from the European Union continue at a pace – as a Local Enterprise Partnership – it is important that we ‘temperature test’ our business community and relay their views to Government.

“Clearly, some of our business community have genuine concerns across several areas of the negotiations and reassurance is needed.

“Oxfordshire’s economy is undoubtedly a strong and adaptable one. We have an excellent record of supporting small businesses to survive beyond five years and it was recently-announced that 50,000 new jobs have been created in the county between 2012 and 2017.

“We believe business in Oxfordshire can continue to thrive post-Brexit, on both a national and international scale.”

Head to OxLEP’s Twitter feed (or search #OxLEPBrexit on Twitter) to see some of the key points discussed by panellists and audience members. Go to our events section for more details on future Q&A events.