Latest Q&A event: 'Productivity in Oxfordshire - is there still room for improvement?' 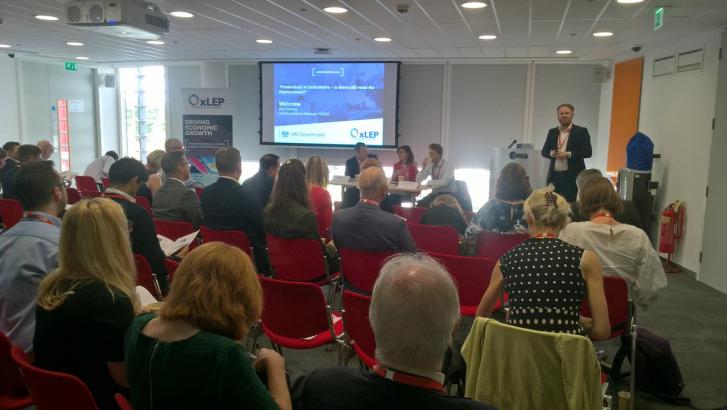 Around 50 business leaders from across Oxfordshire came together earlier today (9 July) at the Oxfordshire Local Enterprise Partnership's latest Q&A event, discussing productivity in Oxfordshire and how it could be improved further.

The debate: 'Productivity in Oxfordshire - is there still room for improvement?' was the latest in a series of Q&As led by OxLEP, bringing together the county’s businesses to discuss key aspects of the economy.

Previously, Q&As have focussed on areas such as connectivity in Oxfordshire, what the county offers in terms of ‘place-making’, as well as a previous event looking at what education providers and young people can do to prepare for the jobs of tomorrow.

The event was chaired by radio presenter Howard Bentham.

During the Q&A debate, the panel discussed levels of productivity in Oxfordshire, a county where - on a per-head basis - the output of our workforce is already in the top 20 per cent of all English regions (Office for National Statistics, Nomis and PwC analysis, 2017).

This comes ahead of the Oxfordshire Local Industrial Strategy, which OxLEP has developed with partners in response to the government's own UK Industrial Strategy and is in its final stages before launching, which aims to place productivity at its core.

OxLEP’s next Q&A event will take place on 24 September at The Oxford Artisan Distillery (TOAD) in Oxford and will be based around the subject of 'Placemaking'. Further details to be announced shortly.

Head to OxLEP’s Twitter feed (or search #OxLEPProductivity on Twitter) to see some of the key points discussed by panellists and audience members.