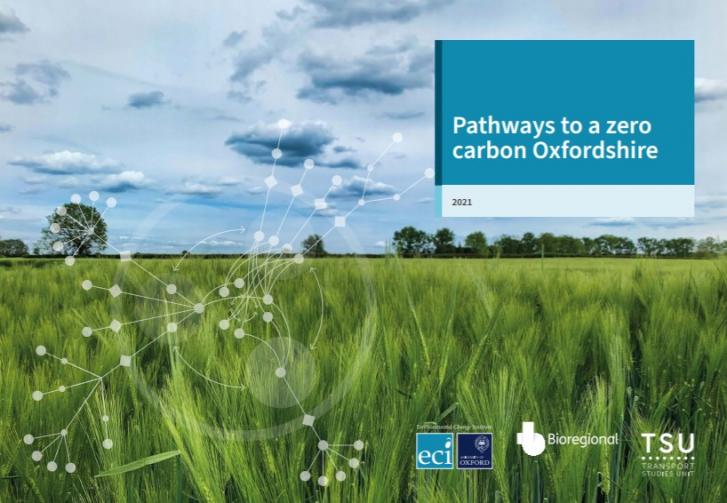 A major new report – launched this morning (29 June) – has challenged Oxfordshire’s key decision makers to embrace a number of new recommendations, aimed at supporting the county’s drive towards a zero-carbon future.

The ‘Pathways to a Zero Carbon Oxfordshire’ report – created by the University of Oxford’s Environmental Change Institute, alongside leading sustainability organisation Bioregional and backed by OxLEP – has highlighted several pathways for the county to achieve a zero-carbon economy by 2050.

It also showcases the considerable sustainability expertise that exists in Oxfordshire, underpinned by a thriving world-class innovation ecosystem.

The report places a spotlight on the challenges ahead in transforming the county’s energy and transport systems, as well as the need to upgrade Oxfordshire’s building stock and use of land for carbon sequestration. It will point to areas where change and investment is urgently needed.

Separate chapters within the report focus on themes including; innovation, transport, buildings and heating, renewable energy, and land use.

The report highlights the successful deployment of solar energy in Oxfordshire and calls for an expansion of up to 10 times current levels. However, the authors also point to sectors where progress on reducing emissions has been slow, including energy efficiency and renewable heating in buildings and in the transport sector.

They predict that the rapid uptake of electric vehicles in the next decade will help to reduce carbon emissions and dirty air, but emphasise the need for behavioural changes and infrastructure investment to drive uptake of active travel, shared mobility and home working.

‘Pathways to a Zero Carbon Oxfordshire’ was launched to an online audience made-up of dozens of business leaders, community officials, local and national political figures and world-leading academics.

In a year that sees the UK host the COP26 climate change conference in Glasgow – taking place between 1 and 12 November – the report couldn’t land at a more relevant time.

The report creates an opportunity to emphasise the significant role Oxfordshire can play outside of the county too, helping to lead global discussions and action on a zero-carbon future.

Ahmed Goga, Director of Strategy and Programmes at OxLEP, said: “The launch of the ‘Pathways to a Zero Carbon Oxfordshire’ report couldn’t be timelier with COP26 now just a few months away.

“Our immense energy expertise is being applied to exploring the boundaries of future energy systems. For example, we are at the centre of all things nuclear fusion – led by the Culham Centre for Fusion Energy – a form of energy that offers the world an abundant and replenishable source of energy within our lifetimes.

“Oxford PV’s next-gen perovskite solar cells have broken the world record for solar energy conversion – a huge step towards efficient and affordable solar energy for all, whilst Harwell Campus’ EnergyTec Cluster and at the Faraday Institution are finding new solutions to energy storage and testing novel energy systems.

“In addition to this, two of the three UK energy system demonstrators, Energy Superhub Oxford and Project LEO – an ambitious smart grid trial – are based in the county too and it’s this expertise and capability that we continue to highlight widely.

“This report offers our businesses and key decision makers practical solutions as to how we can create a zero-carbon future in Oxfordshire and – collectively – we absolutely encourage all communities from across the county to embrace it.”

Professor Nick Eyre – from the Environmental Change Institute – added: “This report makes clear that there are different possible routes to achieving a zero-carbon economy over the next three decades, depending on the types of technological and social change we decide to pursue.

“What is clear though is that transformative change will be needed in the ways in which we use and generate energy; design and use transport systems, and plan our use of land.”

Oxfordshire’s low carbon energy sector generates £1.15bn a year and over the past half-decade, the county has attracted £2bn in foreign direct investment. Meanwhile, the county’s Energy Strategy is set to help spearhead a further £1.35bn annually to the Oxfordshire economy, creating at least 11,000 new jobs in the low-carbon sector by 2030.

In addition, Oxford will be the first UK city to introduce a zero emissions zone and the county has over 270 community renewable energy projects, including the UK's first community-owned solar and hydro schemes.

Download the 'Pathways to a Zero Carbon Oxfordshire’ report