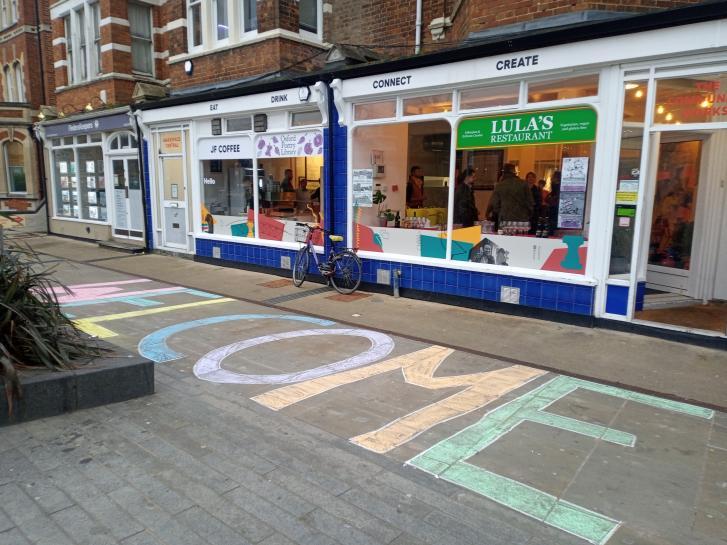 With £1.9m of funding secured by OxLEP from the Government’s Getting Building Fund – set up to accelerate the UK’s economic revival from COVID-19 through the delivery of capital projects – the programme set out to transform vacant retail units in high streets across the county into independent shops, cultural venues, affordable creative studios and co-working spaces.

The wake of the COVID-19 pandemic dealt a devastating blow to our already struggling high streets, with a vast drop in footfall in the city and its local centres and significant reductions in visitor spending.

The ‘Meanwhile in Oxfordshire..’ programme set out with ambitions to provide affordable premises to more than 100 organisations and support at least 300 jobs across the county, contributing to a more inclusive and resilient city centre. Now, over one year on, the impact of the programme to restore and reimagine our high streets is beginning to come into fruition.

Makespace Oxford, the social enterprise commissioned to run the project, specialises in utilising ‘Meanwhile’ space, securing the leases of vacant units for socially-minded and community-led organisations.

One of Makespace’s flagship buildings is their co-working space on Frideswide Square, the ‘Community Works’, which has continued to grow in success since the beginning of the ‘Meanwhile in Oxfordshire..’ programme.

One of the key vendors – and to many the face – of the Community Works, Lula’s Ethiopian and Eritrean Cuisine is the popular Oxford eatery that has come to call the front segment of the building home.

After successfully serving up their food at Oxford’s bustling Gloucester Green market for several years, family-run Lula’s came to secure their restaurant space in October last year and have since gone from strength-to-strength, with TripAdvisor’s July update seeing the eatery rank second in their list of top-reviewed restaurants in Oxford.

Find out more about the ‘Meanwhile in Oxfordshire’ programme

Discover more about our other Getting Building Fund projects