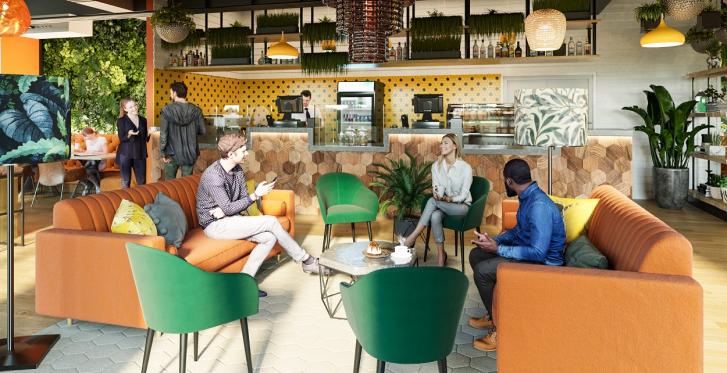 Ahead of Earth Day on 22 April, Milton Park is 'buzzing' about the Bee House, which has sustainability at its heart.

The team at Milton Park has left no stone unturned to make sure the Bee House – Oxfordshire’s largest, newest and buzziest collaborative workspace – is at the forefront of sustainable innovation.

Located at 140 Eastern Avenue at Milton Park, the launch of the Bee House in May will mark the end of a £12.4m refurbishment.

Repurposing an existing building which has outlived its original purpose is the most sustainable of all construction methods, as it saves high percentage of embodied energy within the fabric of the building, reduces demolition waste, minimises the need for new materials, and reduces the level of construction traffic visiting the site.

Before it was known as the Bee House, the building originally was home to IT firm RM. The company has been based at Milton Park since the 1980s and is the second-oldest spinout to come out of Oxford University, having started its journey in 1973.

After 25 years of occupation and with evolving needs, RM subsequently moved across the road into new premises on Milton Park. The building evokes fond memories from many RM employees who had worked in the building over the years.

The Bee House will be electrically-cooled and heated using a green renewable energy tariff. Occupiers will be able to control the temperature in their own environment by turning off the lights once they have left, via a dedicated Bee House app, reflecting Milton Park's ambition to work in collaboration with its occupiers to reduce their carbon footprint.

ASA Landscape Architects designed a SUDS (sustainable urban drainage system) for the site that will attract wildlife and help to prevent flooding. Space previously used for car parking has been replaced to make room for bioretention swales.

These swales will clean water from areas of paving and half of the building’s roof, while also creating inviting seating areas for occupiers.

Meanwhile, the use of an innovative gravel mulch system will help to reduce the need for weeding and keep moisture within the soils. A series of moss walls will bring the outdoors inside.

A water course previously screened by the parking area has been opened up to create a new wildflower meadow, designed to attract buzzing bees and other pollinators throughout much of the year. A bespoke bee hotel has also been introduced, integrating branded signage with a home for solitary bees.

Milton Park is currently home to two separate beehives, with plans in the pipeline to increase this to four later in the year. Once ready, the team at Milton Park hope to harvest the honey generated from the beehives and give jars away to occupiers.

Over the years, Milton Park has developed a special relationship with the Bee, its chosen spirit animal. The inspiration for the Bee House’s name came from the discovery of the what3words square in the building - ///feasted.cloud.honeybees In the Bee House you can feast in the new café, work in the cloud and collaborate like honeybees in a flexible workspace with a home-from-home vibe.

Kathryn Andrew, Assistant Development Manager at MEPC Milton Park, explains more about the Bee House’s sustainability credentials: “We’re very excited to be counting down the days until the Bee House’s launch in May, which will give us the opportunity to showcase the building’s sustainable qualities.”

Sustainability will also play an important part in the ongoing maintenance of the Bee House, such as keeping the workspace clean. For instance, using dissolvable tablets, chemical-free cleaning solutions will be generated on-site and transported using refillable bottles.

While the building itself will be at the buzzing edge of sustainability, there are a number of convenient ways for people to travel sustainably when visiting the new flexible workspace. For keen cyclists, there will be secure bike parking areas, a cycle hire hub, showers, and heated lockers. Fast-charging electric vehicle (EV) points will also be easily accessible to those who need to plug in. Like others based at Milton Park, for just £20 per year, people working at the Bee House can benefit from unlimited bus travel within Didcot Zone 1.

Philip Campbell, Commercial Director at MEPC Milton Park, said: “The innovations we’re now seeing at the Bee House can be traced back to James Dipple, our previous CEO, who had the brilliant foresight to develop the building’s under-croft parking in such a way that in the future it could be repurposed.”

The Bee House will offer a range of small and medium-sized flexible office spaces, ranging from 97 to 2,574 sq. ft (9 - 239m), providing businesses with the flexibility to fly and spread their wings.

The space will also feature a 145-seat conference facility, the fun and vibrant Hive Café, as well as meeting rooms which will all be named after varieties of honey. For individuals who want to bee-long to this new dynamic community, there are also a range of co-working memberships on offer to suit every need.

Find out more on the Bee House at Milton Park