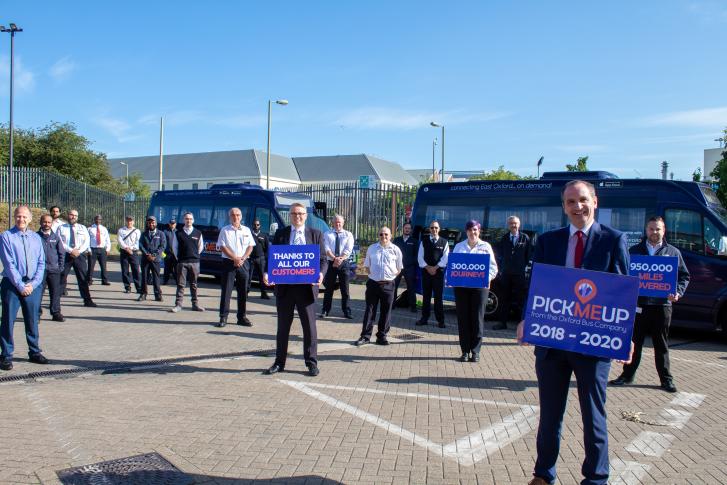 Oxford Bus Company can confirm it has applied for a grant via the government’s Rural Mobility Fund, in partnership with Oxfordshire County Council, which if granted would result in a revised PickMeUp service returning to the county.

PickMeUp was launched to improve connectivity in the eastern arc of Oxford by complementing traditional bus routes. It enabled passengers in eastern Oxford to summon buses to pick them up on a street corner of their choice, to go to a bespoke destination.

More than 38,000 people downloaded the app and more than 300,000 journeys were made on the service which covered 950,000 miles. However, the service did not reach the commercial milestones required to make it sustainable beyond the two-year pilot, even though not all demand could be met.

Phil Southall, Oxford Bus Company Managing Director said: “PickMeUp was a great innovation by Oxford Bus Company and we are proud of its achievements. We have taken a lot of learnings from PickMeUp and are hopeful it could be re-introduced to Oxfordshire if we are successful in our grant funding application, albeit in a revised format.

“Unfortunately, at this time we were not able to secure the additional funding support required to retain the current service beyond the pilot scheme once we had identified that the service could not be sustained financially with the limited number of partners that we had. We would like to thank everyone who has travelled with the PickMeUp service and our superb colleagues who have worked with us throughout the pilot scheme. It is no reflection on their hard work that we have had to finish operating the service.”

If the Rural Mobility Fund Demand Responsive Transport proposal is successful, the revised service would serve rural and suburban areas surrounding Oxford city. Five zones would be created around the city, which would each include a Park&Ride location as a 'mobility hub' for onward connections. The service would not serve the city centre.

It would seek to improve connectivity to existing inter-urban bus corridors for rural and suburban communities to provide greater access to employment hubs, shopping, healthcare, and entertainment areas. This would help reduce levels of isolation, enhance independence, and help tackle congestion.
Working in partnership with providers including Oxford Bus Company, the county council recently submitted four Expressions of Interest to DfT to access around £20M of Government support for Demand Responsive Transport services under the Rural Mobility Fund.

County Councillor Yvonne Constance, Cabinet member for Environment and Transport, said: “Demand responsive transport has a future in Oxfordshire and the lessons learnt from the Pick Me Up service will help shape services to come. Our hope is to get government support for bus services that will suit people’s travel requirements in different communities across the county, including those who live in some of our more remote areas.”