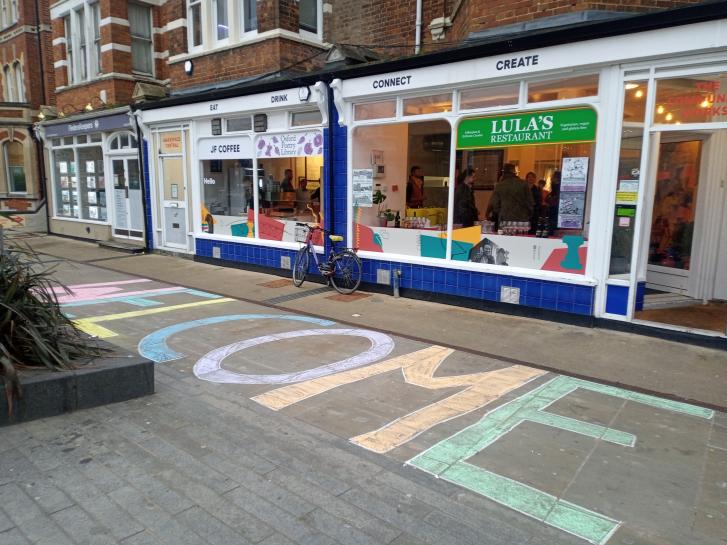 In November last year, Makespace Oxford announced that the third of its flagship city centre workspaces was opening its doors for the first time, with the local community interest organisation offering affordable trading and co-working space to a number of purpose-driven businesses at its new Community Works building on Frideswide Square in Oxford.

Featuring a front-facing cafe and restaurant, a community lounge and separate private rehearsal, event and studio spaces to the back of the unit, the ambitious new space offered the opportunity for community-led organisations and socially-minded businesses alike to come together, whilst each operating from their own affordable workspace.

On Tuesday, the new hub was brought to life, celebrating the six organisations and vendors with community at their core, who have since begun trading and occupying private studio space within the building - alongside the wider local community who informed critical research into what they wanted to see within the reanimation of the space.

The ‘Meanwhile in Oxfordshire’ programme is supported by the government’s Getting Building Fund, with funding secured by OxLEP.

Amongst the businesses that have taken up residence at the Community Works are Lula’s Ethiopian & Eritrean Cuisine, who have run a popular stop at Oxford’s regular food markets, and JF, a takeaway cafe outpost of local restaurant The Jam Factory, located just around the corner on Hollybush Row.

Other residents include the Oxford Poetry Library, a largely mobile incentive that seeks to celebrate poetry and ensure its accessibility to all, alongside the Oxford Playhouse, with the renowned independent theatre taking up additional rehearsal and design space.

A small studio space at the back of the ground floor location is home to Live Illustration, a small agency that provides some of the best graphic recording artists in the UK to visually capture events, alongside textile artist, Robyn Macdonald Knits.

The lounge area also provides an opportunity for purpose-led individuals and organisations to display artwork and information about local projects and initiatives, supporting knowledge sharing, solidarity and mutual support between people committed to positive social and environmental change in Oxford.

The opening event comes as further units around the county continue to be secured by Makespace Oxford through the ‘Meanwhile in Oxfordshire’ programme, including spaces housing a number of private offices in Didcot and Abingdon, along with the opportunity for the first co-working space of its kind in Chipping Norton.

In a speech given at the opening event, Makespace Oxford Co-founder and Programme Lead, Andy Edwards said: “This is a great opportunity to bring together all those that have been a part of the creation of this space and to open, which has been a phenomenal collaborative effort.

“We’re really grateful for the opportunity to give our thanks to funders and partners, but also those local residents and members of the community who helped to shape this space, as we really wanted to reflect what they want to see in their city centre and make that more accessible.

“Our aim has always been to create a space within the Community Works where people can just be, connect and share - and we are just at the beginning of that journey. We know there is still more we can do to make this space even more accessible to wider community groups, whilst continuing to showcase the potential of ‘meanwhile’ space and how unused space can be utilised by community-minded businesses, to whom such space would not otherwise be affordable.”

Nigel Tipple, Chief Executive of OxLEP, added: “As the Local Enterprise Partnership for Oxfordshire, it’s really important to emphasise and reiterate that we, and partner organisations, recognise the challenge facing our high streets and collectively remain determined to breathe new life into them across the county.

“Locations like Community Works can be the ‘cogs’ of our local economy and once these start to build momentum, confidence begins to grow.

“We are delighted to support the work of Makespace Oxford and to have secured significant investment for its ‘Meanwhile in Oxfordshire’ scheme too.”

Find out more about ‘Meanwhile in Oxfordshire’