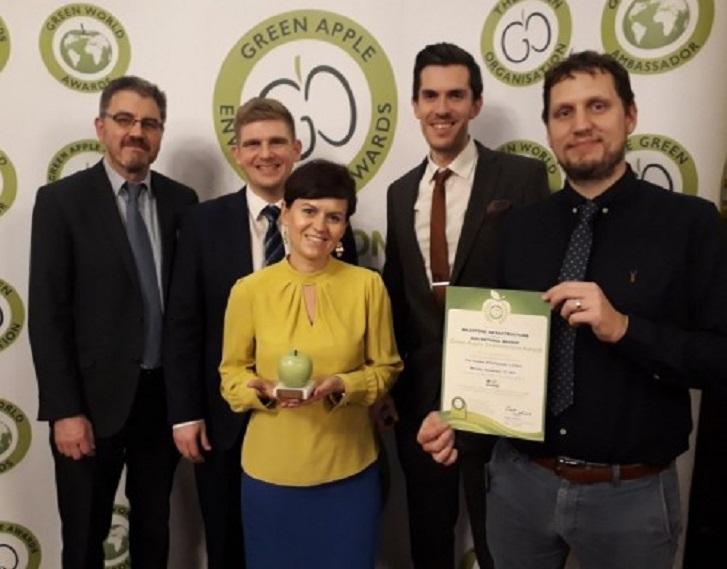 A section of Oxfordshire’s Science Vale Cycle Network (SVCN) has been awarded a Bronze International Green Apple Environmental Award by The Green Organisation, as recognition for its positive environmental impact.

Over 34 tonnes of CO2 were saved during construction of Route 1 of the SVCN. The project was a collaboration between Oxfordshire County Council, Milestone Infrastructure, WSP and Fergal Contracting Company, with funding secured from the government’s Local Growth Fund by the Oxfordshire Local Enterprise Partnership (OxLEP).

Councillor Duncan Enright, Cabinet Member for Travel and Development Strategy, said: “Thanks to this new network, our countryside surrounding the Science Vale is wide open to cyclists and walkers, including people going to and from work and home.

“I am delighted that the outstanding work of our teams has been recognised. They have worked hard to provide a sustainable web of routes connecting Wantage to Abingdon via Didcot by bike. This is one more step on our way to our goal of carbon neutrality by 2030.”

Known as the ‘Icknield Greenway’, Route 1 of the SVCN runs for around 4,700m from Wantage to Harwell Campus, through an area of outstanding natural beauty.

Beating eight other shortlisted candidates, the judges were particularly impressed by the project’s commitment to environmental best practice, including:

The project is another example of Oxfordshire County Council working together with contractor, Milestone Infrastructure, to minimise the environmental impact of their work. Milestone has been using hydrotreated vegetable oil (HVO) to power all construction plant and welfare facilities at the council’s A40 north Oxford site, between the A34 overbridge and the Wolvercote roundabout.

Richard Stonehouse, Contracts Manager at Milestone Infrastructure, said: “Sustainability is a key focus for all of us at Milestone Infrastructure and our work on the Science Vale Cycle Network has been a great example of this. Our receipt of this Green Apple Environmental Award is testament to the collaborative approach taken towards responsible environmental practice by everyone involved.

“Our teams planned all works meticulously, ensuring that carbon was reduced, wildlife was protected, and material was used as responsibly and sustainably as possible. This will leave a lasting impact on the local community, providing them with a high-quality, sustainable route that enhances transport links throughout the region.

“Congratulations to everyone involved in the project on this award.”

Nigel Tipple, Chief Executive at OxLEP, said: “This achievement is excellent news, recognising improvements to the cycle network that not only showcases best practise in the delivery of sustainable travel route schemes, but has a wider positive impact, improving the quality of life for people and communities in Oxfordshire.

“As the Local Enterprise Partnership for Oxfordshire, we will continue to play a vitally important role for the county moving forward, with investment secured enabling new opportunities that will benefit businesses and communities alike for many years to come and – working with the private and public sector – we are determined to ensure Oxfordshire benefits from an infrastructure that is sustainable, fit-for-purpose and supportive of dynamic, world-leading economy.”

Route 1 was officially opened to the public in January 2021. A further five routes have also now been completed and are open to the public.

Further information on the Science Vale Cycle Network can be found on the county council’s website.