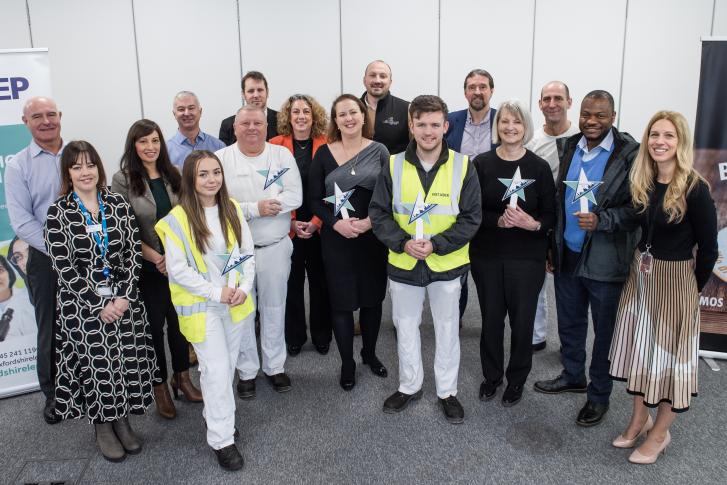 Jacobs Douwe Egberts (JDE) UK and OxLEP – alongside other employers and politicians – last week (20 January) called for Oxfordshire organisations to help businesses to take on their first apprentice.

JDE Banbury – home of household coffee favourites Kenco, L’OR and Tassimo – and OxLEP led the roundtable discussion, which focused on how organisations in the area can work together to promote apprenticeships to a wider pool of employers.

Current apprentice Grace Robinson and Ryan Taylor, former apprentice and winner of the Oxfordshire Apprenticeship Awards’ Shining Star, spoke about the challenges of starting as an apprentice,and how crucial pastoral support and mentorship was in helping them to begin their careers and settle into their apprenticeships.

Attendees discussed a number of ways in which apprenticeship take-up can be improved, including:

The findings of the roundtable will support OxLEP’s Social Contract programme, launched in May 2022. Under this programme, the OxLEP Skills team are providing free support to levy-paying businesses to help them transfer unused funds to employers who are keen to access funding to pay for apprenticeship training in Oxfordshire.

This ensures that these funds stay in the region and help local employers to hire apprentices.

JDE has already pledged over £50,000 of their unspent apprenticeship levy to support Katharine House Hospice and Hedena Health Centre, providing training for key roles in the NHS and primary education.

Victoria Prentis, MP for Banbury and Attorney General, said: “Apprenticeships are a brilliant way for young people to kickstart their careers. They also have a really positive impact on businesses and the wider economy.

“Ahead of National Apprenticeship Week, I was pleased to join a roundtable hosted by Jacobs Douwe Egberts and OxLEP in Banbury. It was great to hear from local business leaders and apprentices about their experiences. We discussed everything from the important role local businesses play in creating jobs and upskilling people to how apprentices can be supported in the long term. I really would encourage all those considering their next steps to think about an apprenticeship.”

Keith Fisher, Apprenticeship Manager, JDE Banbury, commented: “I’m incredibly proud of our apprentices and it was fantastic to be able to introduce them to so many people and highlight the work they’re doing. Having been at JDE for over 20 years, I’m excited to see how the apprenticeship programme will go from strength to strength as we bring in more people and continue to work with OxLEP, and others, across the region to give people more opportunities.”

JDE Banbury has a long-standing commitment to apprenticeships. In 2023, the business will take on another cohort as it looks to celebrate its 40th year of training apprentices. JDE will also be the headline sponsor of the Oxfordshire Apprenticeship Awards in 2023 – led by OxLEP – showcasing the role they can play in the wider Oxfordshire business community.

Sally Andreou, Skills Hub Manager at OxLEP, said: “Through our Social Contract programme, we’re committed to helping local employers invest in their people, and there’s no better way than an apprenticeship. We know that many businesses struggle to do it on their own, which is why we’re  proud to be providing a free service to businesses to either unlock or access the apprenticeship Levy, we have also launched the Oxfordshire Apprenticeship Grant Scheme, giving people between £1,500 and £3,000 to help remove barriers that would prevent them starting or finishing their scheme. We urge more businesses to work together and with us to share their knowledge and promote opportunities across Oxfordshire.”

Cllr Liz Leffman, Leader of Oxfordshire County Council, added: “At Oxfordshire County Council, we want to invest in people’s future careers and aspirations, allowing them to gain new skills with on-the-job training and recognised qualifications. Apprenticeships play such a key role - we want to build on our own work, as well as urge other local employers on what they can do. We received the Large Employer Award at the Oxfordshire Apprenticeship Awards and our apprentices are achieving great things, being recognised for the Apprentice of the Year and the Shining Star awards.”

Find out more on the Oxfordshire Apprenticeship Grant Scheme

Find out more on the Oxfordshire Apprenticeship Awards 2023