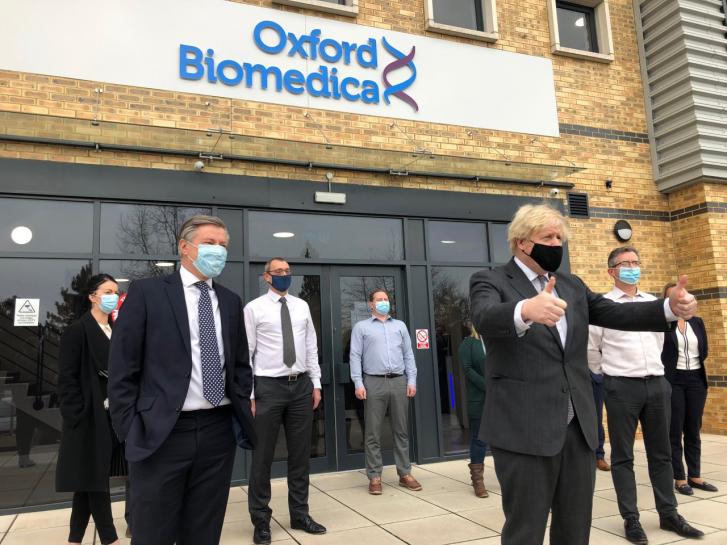 Oxbox was originally built to solely service the Group’s growing demand for lentiviral vectors in the fast-growing cell and gene therapy market where it is a leading global specialist working with multiple partners including Novartis, BMS and Sanofi.

The Oxbox facility was completed at the end of 2019 with the Group expecting to have one or potentially two of the manufacturing suites approved during 2020. In April last year, the Group joined the Oxford Vaccine Consortium and shortly afterwards signed the first of two agreements with AstraZeneca for COVID-19 vaccine production.

By October, the Group had four manufacturing suites approved by the MHRA, three of which were contracted by AstraZeneca and are currently producing bulk vaccine at 1000L scale.

The Prime Minister said: “I was delighted to visit Oxford Biomedica, and hear from John, Nick, Simon, Nisha and others about the work being done to manufacture the Oxford vaccine.

"The tireless work of your 250-strong team has helped accelerate our vaccine rollout, meaning millions of life-saving jabs are already in arms across the UK. You should be hugely proud of the role you’ve played in protecting the vulnerable, whilst creating a domestic manufacturing capability in months that would usually take years. I urge you all to keep up your vital work in ensuring the strong supply of vaccines to the frontline, and help deliver the biggest inoculation programme in British history.”

John Dawson, Chief Executive Officer of Oxford Biomedica, said: “We were delighted to host the Prime Minister today at the formal opening of our Oxbox manufacturing facility. Oxford Biomedica is a global leader in lentiviral vectors and we as a Group were delighted to be able to rapidly deploy this world-class facility as part of the consortia to help during this global crisis.

"Oxford Biomedica’s participation in this global effort is a true testament to the dedication, expertise and hard work of our staff who have made huge efforts to bring our manufacturing suites on line in record time to manufacture COVID-19 vaccine at a scale we have not seen before and in different viral vector to which we are traditionally known.”

Find out more on Oxford Biomedica and the Oxbox facility