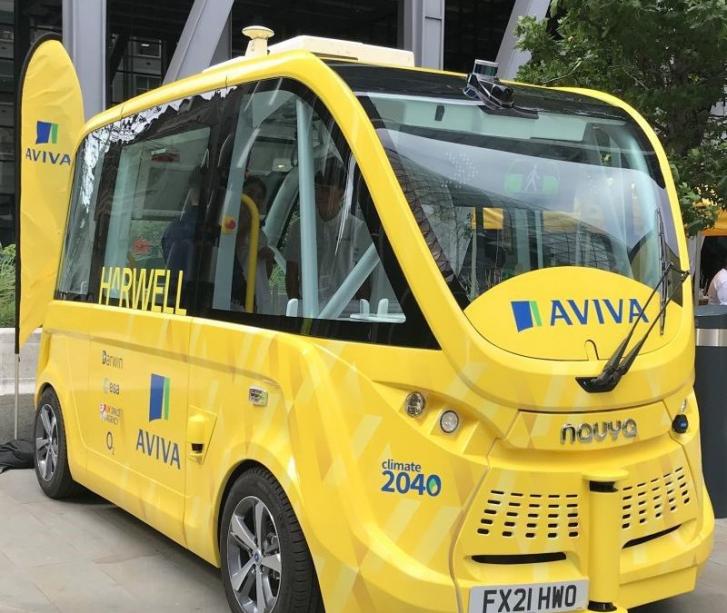 An autonomous shuttle will transport passengers around Harwell Science and Innovation Campus during a one-year trial funded by the UK Space Agency and European Space Agency (ESA) ~ The service will help to demonstrate how self-driving vehicles operate in a real-world setting, with data transmitted via O2’s 4G and 5G networks and Hispasat’s satellites ~ The electric shuttle emits zero CO2, showing how the future of public transportation can be both autonomous and green.

The new service is being trialled by Darwin Innovation Group, with support from ESA and the UK Space Agency. An autonomous shuttle will transport passengers around Harwell Campus, home to some of the UK’s most innovative companies and research organisations.

The shuttle, created by Navya, uses LiDAR sensors, cameras and ultrasound sensors to navigate safely around any obstacles. It also features a satellite (GNSS) antenna for positioning. There is no steering wheel, but it does have safety controls, which will be managed by an on-board operator throughout the trial.

Darwin will maintain and monitor the service, tracking the shuttle’s location and gathering information about its operation as it travels. Telematics data will be transmitted from the shuttle in real time using Hispasat’s satellite communication channels and O2’s 4G and 5G networks.

This shuttle service will help demonstrate the potential of self-driving vehicles to operate in a real-world setting, serving as a step towards the wider use of this technology in the UK. Similar Navya shuttles have been used in an urban setting in Switzerland and have safely transported tens of thousands of passengers.

The shuttle, which is battery powered, shows that the future of public transportation can be green as well as autonomous. The potential to transport passengers while emitting zero carbon, if put in place more widely, could help the UK towards its emission targets.

Science Minister George Freeman said: “Until now autonomous vehicles have relied on terrestrial Wi-Fi, which means they can struggle to operate in remote and rural areas. By unlocking the power of space and satellite technology, these shuttles can stay connected all the time.

“Our National Space Strategy promises to put space technology at the heart of our efforts to make the UK a science and innovation superpower. Autonomous vehicle technology has huge applications in key industries, and the UK is committed to lead in adoption as well as technological innovation.”

The shuttle service has already created new jobs at the campus: shuttle safety operators and shuttle mechanics. The people working with the shuttle will be able to share their experience with technology colleges and help improve the available courses.

The autonomous shuttle service operates at Harwell Science Campus during weekdays, morning to evening. It travels two routes, one along Fermi Avenue and one along Eighth Avenue, with the ESA building being the central stop for both routes. There is no cost to ride the shuttle, which is currently available to campus pass-holders and registered guests of pass-holders.

Stuart Grant, Chief Executive at Harwell Science Campus, said: “At Harwell, we’ve created a scale-up ecosystem that promotes collaboration, multidisciplinary innovation and the creation of smart technology. We’re delighted to be able to support campus-based Darwin with the launch and operation of this next-generation autonomous shuttle. The Harwell shuttle will transport over 6,000 employees around the campus, showcasing the future of travel and urban mobility.”

Find out more on the trial