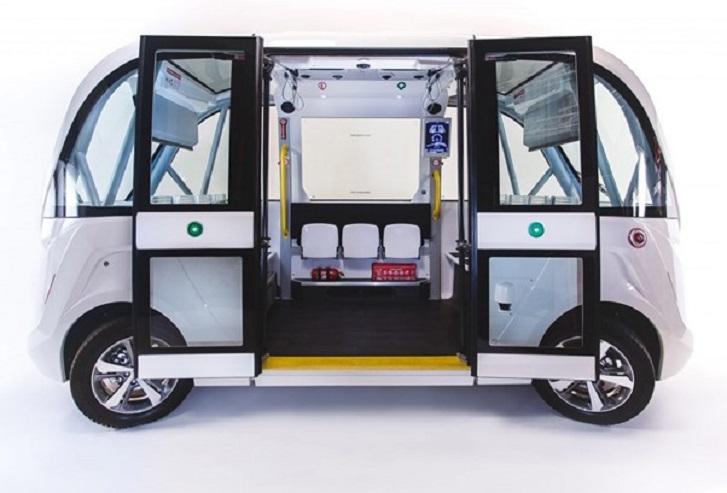 An autonomous shuttle controlled by 5G and satellite connectivity will transport members of the public around the Harwell Science and Innovation Campus, with a second shuttle to be introduced later. The electric shuttles, which do not have a steering wheel, will operate 24/7 to capture data in different light and weather conditions.

Aviva plc and Darwin Innovation Group have announced that they are entering into a five-year strategic partnership, beginning with collaboration on an exciting autonomous vehicle trial.

Darwin is trialling an autonomous shuttle at the Harwell Campus (home of OxLEP's operational hub). Created by Navya, the vehicle, controlled by 5G and satellite connectivity, will be able to pick passengers up, transport them around the campus and drop them off at their destination, all without the involvement of a human driver.

A second shuttle is expected to be added in the second year of operation.

The electric shuttles will operate 24/7, which will allow the capture of data in different light and weather conditions and will transmit this data via 5G and satellite channels. The vehicles will have a high level of automation – level 4 autonomy, according to SAE International’s levels of driving automation – and they do not have a steering wheel.

Darwin has carefully mapped out the campus and provided the shuttles with all the information they will need to navigate the area. The shuttles will be able to communicate with each other, and will be well equipped with sensors, so they can navigate without obstructing each other and can react to any unexpected obstacles.

Being involved in the testing and development phases of this trial means Aviva is well placed to react to the increasing automation of vehicles on UK roads. The trial will showcase the application of connected autonomous vehicles and allow Aviva to build its first comprehensive insurance model for this type of vehicle, which will evolve as the trial progresses.

The trial with Aviva builds on the October 2020 launch by O2 and Darwin Innovation Group of the Darwin SatCom Lab, the UK’s first commercial laboratory for 5G and satellite communications, situated at the Harwell Campus.

The laboratory enables companies like Aviva to explore next-generation connectivity solutions for connected and autonomous vehicles using both 5G and satellite communications.

Nick Amin, Chief Operating Officer at Aviva, said: “With this trial, we’re able to be there right from the start of the real-life application of autonomous vehicles operating on public roads, which will change not only our relationship with these vehicles but, more fundamentally, how we insure them.

"Autonomous vehicles could change the face of motor insurance within a decade. Through having access to the data from this trial, we can understand today the kinds of things we’ll have to consider in the future to keep passengers, pedestrians and all other road users safe when driverless technology hits public roads.”

Find out more on the trial and Harwell Campus