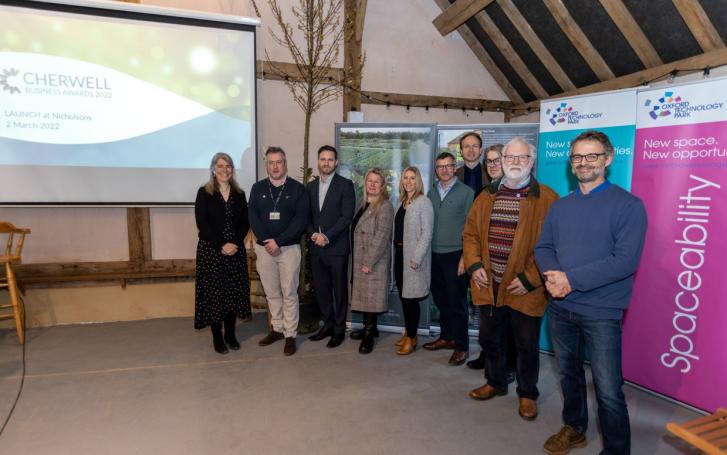 The 2022 Cherwell Business Awards have officially been launched and entries are now open, following a presentation and networking event at Nicholsons on 2 March.

Now in its 10th year, the 2022 edition of the Awards is set to be bigger and better than ever, with some fantastic new sponsors, including Kärcher, EKFB and Bicester Motion – where the Gala Dinner and Award Ceremony will be hosted.

Speakers at the launch, included Steven Newman from Cherwell District Council – this year’s Headline Sponsor, as well as Aaron Rudman-Hawkins of The Evergreen Agency and Liz Nicholson of Nicholsons who shared their experience of the CBAs from winning Awards, tips on entering and why they would encourage others to nominate and and enter for this year’s Awards.

The 2022 Award categories include:

Plus, the coveted Norbar Overall Cherwell Winner, selected from the finalists of all ten categories.

Placi Espejo, one of the four directors of the Cherwell Business Awards, said: “We are extremely excited to have launched the 2022 Awards and are really looking forward to showcasing and celebrating the achievements of individuals and organisations working within the Cherwell District.

"The process to nominate and enter is extremely simple via our website and the benefits of being shortlisted and even better winning one of the 11 Awards are invaluable for your business.”

The deadline for nominations is 15 April and the application deadline is 29 April.

During May and June, all applications will be assessed and judged, with the finalists announced in July. Winners will be announced at the prestigious Awards Gala Dinner to be held at Bicester Motion on 16 September.