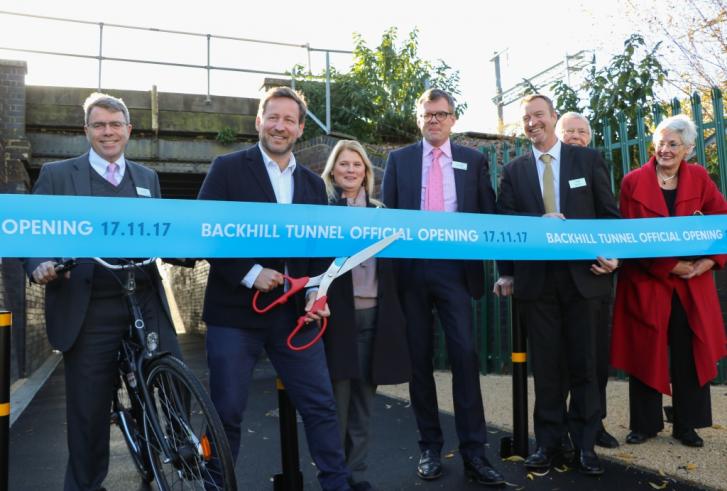 The first phase of the redevelopment of a disused tunnel – shut for several decades – has been completed.

Backhill Tunnel – which links Milton Park and the adjacent A4130 in west Didcot – was officially opened earlier today (17 November) by Didcot and Wantage MP Ed Vaizey.

The redeveloped tunnel now benefits from a lit pedestrian and cycle link, joining the northern side of the A-road directly with Milton Park.

The tunnel is set underneath the main London Paddington line and was redeveloped through its existing structure.

Its completion will now enable 9,000 people working at Milton Park to either cycle or walk to-and-from their place of work. The tunnel will also allow better access to amenities at Milton Gate, including the four-star Milton Marriott hotel, due to open next summer.

Alongside Mr Vaizey at the official opening were representatives from the Oxfordshire Local Enterprise Partnership (OxLEP), Oxfordshire County Council and South Oxfordshire and Vale of the White Horse District Councils.

Representatives from MEPC – the asset manager and developer of Milton Park, who organised the event – were also in attendance alongside members of the 250 businesses based there.

OxLEP secured the £1.4m funding for the project via the government’s Growing Places Fund, with further private works funded directly by MEPC.

A second phase of the project – which will see the creation of a safe crossing for pedestrians and cyclists across the A4130, adjacent to the tunnel – is set to be completed by March next year.

Nigel Tipple – OxLEP Chief Executive – said: “The completion of such a significant project – that will have a positive impact on hundreds of businesses and their employees – is excellent news.

“As the local enterprise partnership for Oxfordshire – we want to ensure our county benefits from an infrastructure that is fit-for-purpose, supporting economic growth.

“Recent national research has shown that the demand for business space in Oxfordshire is at its highest level in just under five years – with this mind, projects like this will further attract businesses to invest in the county.

“We believe this project meets that aim and even supports people to take up a more active lifestyle.”

The tunnel’s opening also coincided with Milton Park’s ‘Bike 2 Work’ event – encouraging employees across the site to take to the saddle as part of their commute to work.

Philip Campbell – Commercial Director at Milton Park, MEPC – said: “We’re delighted the tunnel is now open. It provides an excellent new pedestrian and cycle link into Milton Park and will also allow the many thousands of people working at Milton Park access to the amenities at Milton Gate, which will soon include the new four-star Milton Marriott hotel.

“We’d like to say a huge thank you to everyone involved.”

Ed Vaizey MP added: “It has been a great honour to be asked to open Backhill Tunnel today.

“This is a great piece of infrastructure which will benefit a huge amount of people that work in Milton Park and also those who will be staying in the area at the new hotel.

“I am particularly impressed by the way these projects can be achieved when the local enterprise partnership, county council and Milton Park work so well together.”

County Councillor Yvonne Constance – Oxfordshire County Council Cabinet Member for Environment – said: “After two years of close working with our partners at the UK Atomic Energy Agency, Network Rail and local businesses we are delighted to be realising the project and to further enhance pedestrian and cycle links.

“Opening this underpass beneath the Great Western Railway provides an excellent opportunity to improve access for residents to jobs and recreation, reducing distances to bus services and reducing the need for private car use.   “This legacy will further support the many millions of pounds the county council is spending on cycling and walking infrastructure in Oxfordshire over the coming years.”

Councillor Matthew Barber – Leader of Vale of White Horse District Councils – added: “We are delighted that the disused tunnel has been reopened for everyone working and travelling around Milton Park and the wider Science Vale area.

“Projects to open pathways and cycle routes fit exactly with the principles of the Didcot Garden Town and we hope to see more schemes as new plans are formalised.”