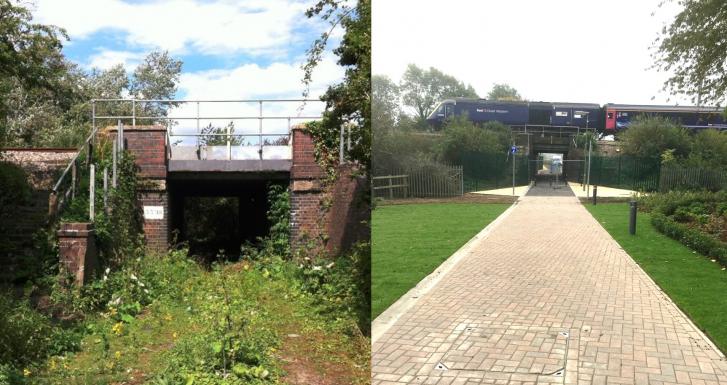 Work leading to the reopening of a disused pedestrian tunnel on the edge of Milton Park in South Oxfordshire is now in its final stages, with the first phase of the project set to be completed as soon as early-November.

The development of Backhill Tunnel – adjacent to the A4130 in west Didcot – will firstly see a pedestrian and cycle link through the existing tunnel structure, linking the northern side of the A-road into Milton Park.

A footpath towards Milton Gate on the northern side is also part of the works.

A second phase of the project will see the creation of a safe crossing for pedestrians and cyclists across the A4130, adjacent to the tunnel.

MEPC – the asset manager and developer of Milton Park – has worked closely with Oxfordshire County Council to deliver the scheme which has been fully-funded by the Oxfordshire Local Enterprise Partnership (OxLEP).

The completion of the tunnel will enable several thousand people based at Milton Park, to either cycle or walk to-and-from work. It will be particularly beneficial for those living to the south of A4130 at Great Western Park.

The tunnel will give workers at Milton Park better access to amenities on Milton Gate, including the recently announced 4-star Milton Marriott hotel which is due to open in summer 2018.

OxLEP secured the £1.4m funding for the project via the government’s Growing Places Fund scheme.

Nigel Tipple – OxLEP Chief Executive – said: “This scheme will certainly have a positive impact on Milton Park-based businesses, its staff and local residents across the south of the county alike.

“In particular, it will mean quicker pedestrian and cycle access – for around 9,000 people based at Milton Park – to a number of key amenities nearby.

“It is one of our aims to ensure Oxfordshire benefits from an infrastructure that is fit for purpose and one that supports economic growth.

“We believe this project meets that aim and even encourages people to take up a more active lifestyle.”

Following completion of the tunnel development, work to create the safe crossing option will begin. This phase of the project is expected to be complete by early-March 2018.

Councillor Yvonne Constance OBE – Oxfordshire County Council’s Cabinet Member for Environment – said: “Following two years of close working with our partners at the UK Atomic Energy Agency, Network Rail and local businesses we are delighted to be realising the project and to further enhance pedestrian and cycle links.

“Opening this underpass beneath the Great Western Railway provides an excellent opportunity to improve access for residents to jobs and recreation, reducing distances to bus services and reducing the need for private car use.   “This link will further support the many millions of pounds the county council is spending on cycling and walking infrastructure in Oxfordshire over the coming years.”

Philip Campbell – Commercial Director at Milton Park, MEPC – said: “We’re so pleased to have the Backhill Tunnel opening. It will be a great benefit to people already working on Milton Park and any new companies joining our community in the new Park Drive East development.

“We’d like to thank Oxfordshire County Council, Network Rail, OxLEP and all others involved for making this happen.”