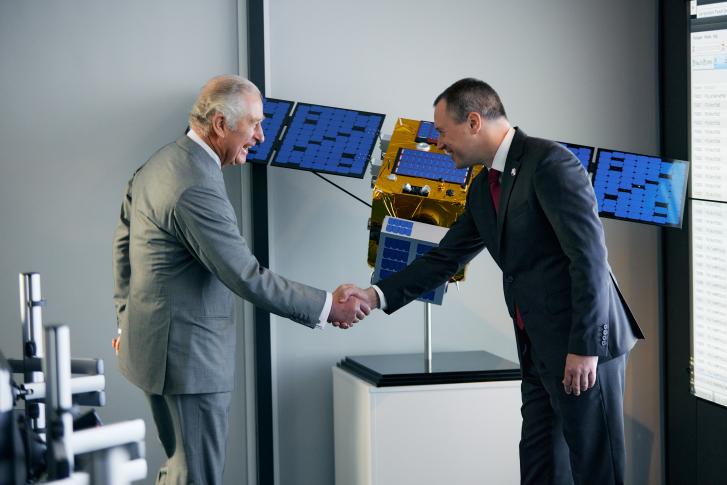 His Royal Highness the Prince of Wales visited Astroscale’s ELSA-d Mission Control Centre on Tuesday (31 January) to learn more from the first private company to demonstrate a vision for the safe and sustainable development of space for the benefit of future generations.

His Royal Highness gathered with leading industry representatives from OneWeb and the Satellite Applications Catapult, together with Minister for Science, George Freeman MP and Paul Bate, CEO of the UK Space Agency.

The group toured the ELSA-d Mission Control Centre at Harwell Campus and met with a group of young engineers from Astroscale who are breaking new ground to provide a solution to the growing problem of space debris, an issue that puts critical satellite infrastructure and astronauts based on the International Space Station (ISS) at serious risk.

His Royal Highness, Prince of Wales, commented during the visit: “While we’re making rather a mess of this planet, it might be useful to have an environmental management agreement for space.”

Astroscale launched the first end-to-end demonstration mission to remove debris from space in March 2021. The ELSA-d mission, designed to test the technology and capabilities needed to remove a defunct satellite from space, is operated in the UK from the National In-Orbit Servicing Control Centre, a specialist facility developed by Astroscale, in partnership with the Satellite Applications Catapult, and funded by UK Research & Innovation.

The European Space Agency (ESA) estimates there are more than 9800 tons of space junk, including an estimate 2840 defunct satellites, that risk collision with 5000 active satellites, or worse still the International Space Station (ISS).

With the increased global demand for launches of satellites that can provide data to support the environment, the economy and society, there are concerns around ensuring access to space can be provided in a sustainable way without risking in-orbit collisions. The UK’s National Space Strategy, unveiled last September, highlighted the importance of the sector addressing the issue of space sustainability as a strategic priority.

Advancing the technology to remove space debris creates other commercial opportunities that will strengthen the UK’s global position in the space sector, provide further opportunities to lead on space sustainability, and could over time contribute towards Net Zero Space. The sector is known as in-orbit servicing and manufacturing, and it is driven in the UK by a group which convenes regularly via the UKspace Trade Association.

The UK’s space economy has a tremendous opportunity for growth in this sub-sector, highlighted in a report commissioned by the UK Space agency. It’s estimated the fast-growing in-orbit servicing sector will be worth $4 billion globally by 2030, with UK industry aiming to capture first-leader advantage and a $1billion share of the total market.

Stuart Martin, CEO of Satellite Applications Catapult, said. “We already have many capabilities developing at pace within Airbus, SSTL, Astroscale, D-Orbit, ClearSpace and many more. For us to accelerate capability and commercial growth, we need strong partnerships between industry, academia and government, and effective international alliances will be critical.”

Find out more on the visit and Harwell Campus