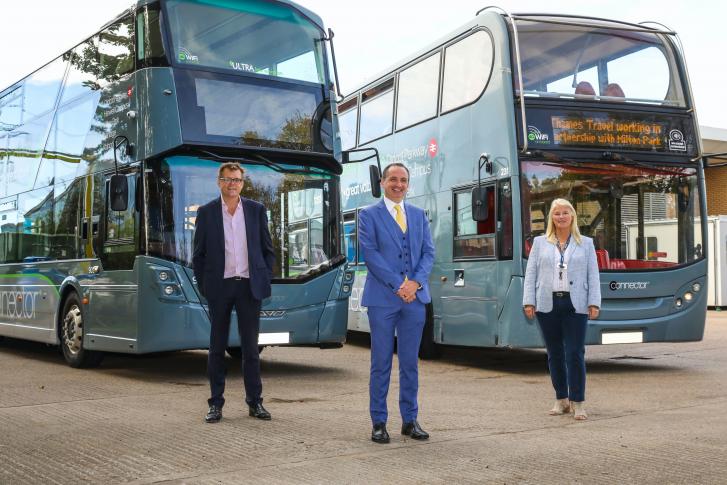 Milton Park has partnered with Thames Travel to provide its new shuttle bus service between Didcot Parkway and the Park, and, alongside additional funding from Oxfordshire County Council, provide an increased number of fast bus services from Oxford, including the East of the city and Headington's Life Sciences District, and Wantage to the Park and more areas within Didcot to benefit the Park’s occupiers, its visitors and the local communities.

The new contract will commence in January 2021 and will offer Milton Park’s occupiers further travel options with more frequent buses between the train station and the Park, longer operating hours to suit new and differing work patterns as a result of Covid-19 and unlimited free bus use all year round to Didcot Parkway, therefore making people’s commute easier.

Due to the investment from MEPC, Milton Park will continue to offer an annual £20 bus pass for its occupiers from Didcot Parkway, but will also now extend this to the whole of a new “Didcot Zone” which covers Great Western Park as well as other areas around Didcot town. This subsidised pass will entitle Milton Park occupiers to unlimited free bus use all year round.

There will be two Milton Park-branded buses dedicated to the route through the Park and will all clearly state that they are stopping at the Park.

The extended local bus service will see additional services from Oxford and Wantage with buses every 30 minutes, rather than every hour, and a new faster route to and from Wantage and Grove.

The partnership will also include an app to help people know about when their bus will be available and estimated arrival time.

There will be 22 ultra-low emission Euro VI buses on these routes and will also have WIFI, USB charging points, contactless ‘free flow’ tap in and out machines and fare caps so people are always charged the cheapest fare.

Phil Southall, managing director, Thames Travel said: “To have been awarded the new contract with Milton Park to provide frequent shuttle bus services to the park from Didcot Parkway Rail Station makes us very proud. This new partnership has also allowed us to connect Milton Park directly with East Oxford and Headington’s Life Sciences District, provide more local and later connections within Didcot and to surrounding villages, and provide a new, faster link to Wantage within our 'Connector' brand of services.

“The significant investment that MEPC is making in the new contract will be supplemented by further funding we have been able to obtain from local housing developments in Didcot’s Garden Town with helpful assistance from Oxfordshire County Council.

“All of this will ensure that Milton Park will now have unrivalled direct bus connections to a wider range of places, with faster journey times, improved ticketing options and more frequent services, to make travelling to the park by bus easier and better than ever to encourage more sustainable travel. Around 15 new jobs will be created at our Didcot depot to operate these new services and we very much look forward to working with Milton Park on achieving its sustainable travel ambitions and its 2040 Vision."

“Following consultations with our Milton Park Travel Forum, which consists of representatives from most of the major businesses on the Park, it was clear that more comprehensive bus services were a priority for many of our occupiers and key workers. Our investment and the changes will give occupiers even more sustainable travel options from neighbouring towns and villages and into Oxford. In addition to the recent introduction of e-bikes to our successful bike loan scheme, an improved pedestrian and cycleway route and imminent plans to reduce the speed limit throughout the Park to 20mph, the new bus contract will benefit both occupiers and visitors to Milton Park. We would like to thank our current provider Courtney Coaches which has provided a loyal and really valued service over the years.”

The new contract will replace the current shuttle bus contract which is held with Courtney Coaches.

Thames Travel believes that TUPE will apply on the transfer of the Milton Park shuttle bus contract from Courtney Coaches.

Phil Southall added: “Any current Courtney Coaches driver working on the Milton Park shuttle service will be offered the opportunity to join Thames Travel and we look forward to welcoming them into our business.

“Now that the change in contractor has been confirmed, we will be working with Courtney Coaches to establish their position with regards to TUPE. Following these discussions, we will be in touch directly with the affected drivers to advise them on the next steps and to discuss any questions or concerns they may have in relation to this change.”

Subject to approval by the County Traffic Commissioner, the new timetables are due to be published in December 2020.

Find out more information on the new services

New Chairman of CLA Oxfordshire branch: 'People are the beating heart of rural communities and must not be forgotten'