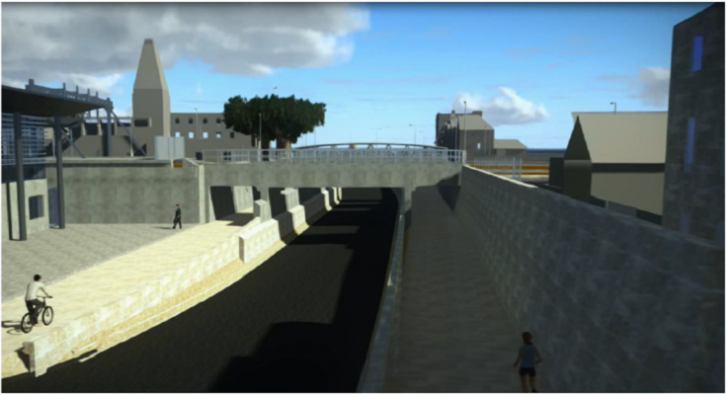 The expansion of Oxford’s rail connections made another step forward, when Network Rail’s Prior Approval application to redevelop the west side of Oxford station was granted from the City Council Planning Committee.

The committee’s approval paves the way for Network Rail to bid for the additional funding from the Department of Transport (DfT) that is needed to take forward this stage of the station development. Final funding from DfT is expected in spring 2022, subject to approval, and the redevelopment would expect to be completed by the end of 2024.

The west side redevelopment will provide significant new services for passengers: a second station entrance with a ticket office and retail space, and an additional platform (platform 5) on the west side of the station. This will expand capacity to meet the growing demand for rail links.

A new, wider rail bridge over Botley Road will include pedestrian access to the west side of the station, and from there an underpass will connect to the current station site.

Next steps on Cowley Branch Line

At the meeting, Network Rail also confirmed it would be taking the next steps in the bid to reopen the Cowley Branch Line as a passenger line, providing fast public transport links from south Oxford into the city centre. Network Rail will now begin work needed to make the business case to the Department for Transport for funding to reopen the line. This was one of the key recommendations of the Oxfordshire Rail Corridor Study (ORCS) and is a key priority for the local area.

Reopening the line for passenger travel would give fast connections into the centre from the south and east of the city. This is one of the least affluent areas of Oxford, and improved transport connections will help open up work and business opportunities and support the development of the planned and much needed new homes.

Currently, Cowley Branch Line is only used by freight trains going to and from the BMW Mini plant in Cowley. If reopened to passengers, it is proposed that the line would have two new stations, supporting the Oxford Business Park and Science Park, with the ultimate aim of a regular half hourly service. The strategic proposal also identifies the opportunity to extend the Chiltern Railways’ London Marylebone to Oxford service.

Oxford’s economy is one of the fastest growing in the UK, and the station redevelopment, and the Cowley Branch Line, will both enable public transport infrastructure to match the increasing demand for regional connections and provide sustainable transport rather than a reliance on cars.

This summer Network Rail published the Oxfordshire Rail Corridor Study (ORCS), which set out how investment in rail connections in Oxford and the surrounding area is key to economic growth in the region.Commissioned by the Department for Transport and the Oxfordshire Growth Board, ORCS was a collaboration of industry partners, as well as the County and City Councils, to develop a rail strategy for the county over the next two decades.

The report looks in detail at Oxfordshire’s predicted growth in jobs and housing and considers how rail can support the delivery of this. Two areas that are expected to see significant growth are Oxford’s Science and Business Parks. With planned housing developments of 7,000 new homes around the branch line plus the growth in employment sites, this would see high demand for travel to Oxford and other stations in Oxfordshire.

Nigel Tipple, Chief Executive of OxLEP, said: “We are very pleased with this latest development, supporting a move forward in Oxfordshire’s rail infrastructure, bringing about major improvements to north-south and east-west connectivity, and access by rail in-and-out of the city.

“The Oxfordshire economy can play a major role in supporting the national economic recovery from COVID-19 and this will go a long way to enabling many of our globally-significant sectors and emerging transformative technologies.

“It also supports innovation-led projects within close proximity of Oxford station, including the University of Oxford-led and OxLEP-backed Osney Mead Innovation Quarter – a development that will see the creation of exciting new, cutting-edge research facilities, commercial space and accommodation.”

Councillor Susan Brown, Leader of Oxford City Council, said: “Demand on Oxfordshire’s rail system – which is vital not just for local but also national services – has significantly expanded in the last ten years and is running out of capacity. This decision is a crucial step in unlocking the investment we need to make sure Oxford’s economic development is not held back by transport limitations and will help encourage people commuting into and across the city to use public transport. I particularly welcome Network Rail’s commitment to the next stage of bringing the Cowley Branch Line back into use as a passenger route.

"We have long campaigned for this as it will transform work opportunities and quality of life for people in south Oxford, and it’s an essential step to make sure economic growth brings benefits across the whole city.”

Oxfordshire County Council’s Cabinet Member for Travel and Development Strategy, Councillor Duncan Enright, said: “We are like passengers waiting on the platform, tapping our toes in impatience for the re-opening of the Cowley Branch Line to passengers. It is central to our rail strategy and wider travel strategy as are developments at Oxford Station addressed by the city council’s planning committee.

The Line connects lots of people and neighbourhoods of the city, with many new houses planned in the same area, and there has long been a desire to see it opened to passenger traffic. It will help a lot to cut traffic issues in the city and connecting this area to other places in Oxfordshire and beyond and will be vital in tackling the climate emergency. We hope that current work will crack on at a good pace so we can hop on passenger trains running along the branch line and catch them at new local stations along the line in the near future as well as seeing much needed changes at the station itself.”

Network Rail’s Western Route and Strategic Operations Director, Mike Gallop, said: “Our plans for Oxford station are vital for the future development of the city, but also stretch much wider around the county and supporting economic growth across the country. We welcome this important step towards them being realised. We will continue to work with local stakeholders, including residents groups, as we finalise the plans and look to secure the necessary funding to ensure it delivers benefit for everyone.”