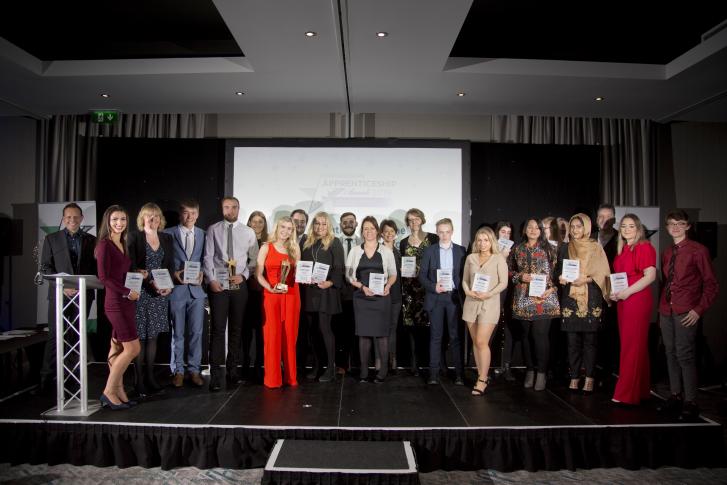 OxLEP aims to reach as many businesses as possible through the Oxfordshire Apprenticeship Awards, inspiring more companies in the county to set-up schemes across a variety of sectors.

Apprentices, businesses and education providers from across the county are getting ready to celebrate success at this year’s Oxfordshire Apprenticeship Awards, which takes place one week today (19 May).

The event – which will be broadcast live on the website of organisers’ OxLEP – will see representatives from a variety of sectors come together to celebrate the importance of apprenticeships, not just to many young people but to the county’s economy as well.

This year’s awards will be the sixth time that they have been held and – since it was launched in 2017 – the event has shone a light on successes across a variety of different apprenticeship schemes, each in their own way bringing new opportunities to young people in Oxfordshire.

More than 20 Oxfordshire-based apprentices, businesses and education providers are now eagerly awaiting to hear if they have been named amongst the winners, which will be announced next Thursday evening at the awards, which start at 7pm.

Led by OxLEP Skills and supported by a business-led committee, the Oxfordshire Apprenticeship Awards will champion work-based learning excellence across a breadth of sectors – from engineering to education – in a virtual ceremony.

And with a week to go, OxLEP’s chief executive is encouraging businesses to watch and participate in the awards, even if their organisation isn’t currently involved in an apprenticeship scheme.

Nigel Tipple hopes the awards will act as a major inspiration to businesses and encourage them to explore what an apprentice could bring to their respective companies.

He also added that this year’s awards also recognise how apprenticeships have been a real option for adults searching for a career change in Oxfordshire, with many using apprenticeships as a vehicle to retrain and establish a new route.

Nigel Tipple said: “Apprenticeships have been integral to the UK’s skills system for many years, offering young people – and indeed, those seeking a change in career direction – an established pathway to a range of compelling vocational careers and ensuring businesses play an active role in training and nurturing this future talent.

“Within Oxfordshire, apprentices are a vital contributor to our capabilities and productivity within key sectors, including health, manufacturing, and the visitor economy to name but a few sectors. As the impact of Covid-19 continues to be felt by the business community, it’s more important than ever that we highlight the positive impact of these schemes and the support available to businesses.

“The 2022 Oxfordshire Apprenticeship Awards are the perfect moment to not only celebrate individual successes, but also inspire young people and employers across the county to begin their apprenticeship journey.”

The latest government statistics show that around 3,000 apprenticeship placements began in Oxfordshire during the 2021/22 financial year, a number that OxLEP hopes to see increase.

Nigel Tipple added: “Given the clear value of apprenticeships to young people and businesses, we would really encourage as many Oxfordshire business leaders as possible to follow and engage with the apprenticeship awards.

“Through these awards, we really hope that more people across our business community will discover apprenticeships and encourage them to further understand how these schemes can support companies across all sectors to reach future ambitions.”

This year’s Oxfordshire Apprenticeship Awards is headline sponsored by The Fiona Wheeler Charitable Foundation, which was established in memory of Fiona Wheeler, co-founder of the West Oxfordshire-based boutique client law firm, The Burnside Partnership.

Fiona – who believed passionately in supporting young people in their careers and was instrumental in establishing The Burnside Partnership's apprenticeship programme – sadly died in December 2019, aged 35 after a long and courageous battle with illness.

A full list of award finalists are as follows:

Advanced Apprentice of the Year Award
Sponsored by NielsenIQ

The Oxfordshire Apprenticeship Awards takes place on Thursday 19 May from 7pm. You can follow the awards on social media via: #OAAwards2022.

One day to go till the #OAAwards2022: Finalist feature - Priory Cast Products, 'creating something with longevity'

Looking ahead to the #OAAwards2022: Blenheim Palace – the apprentices becoming 'part of Blenheim’s legacy'