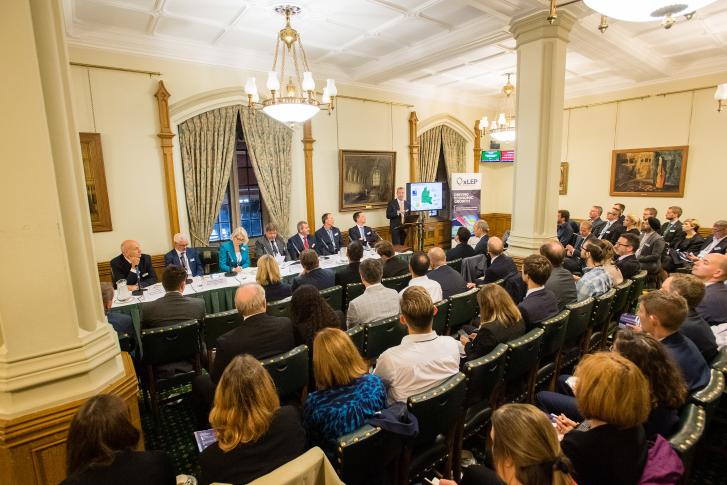 Oxfordshire’s ‘world-class’ artificial intelligence (AI) and robotics capabilities are ‘open for business’ – that was the message the Oxfordshire Local Enterprise Partnership (OxLEP) took to Central London earlier today (8 October), as it staged its fifth House of Commons economic briefing.

It was the latest briefing held in Westminster, which sees OxLEP ‘taking the Oxfordshire economy’ to a national stage. Each event has seen OxLEP promote a transformative technology highlighted in the county’s 2017 Science and Innovation Audit.

This briefing focused on AI and robotics and was hosted by Witney MP Robert Courts, on behalf of all Oxfordshire MPs.

The event highlighted some of Oxfordshire’s internationally-competitive AI and robotics assets, including keynote discussions led by industry expert Professor Stephen Roberts of the University of Oxford and Phil Bradshaw of Intuitive – a robot-assisted surgery company, who recently moved to the world-renowned Oxford Science Park.

The panel was chaired by Dr Matt Perkins, CEO of Oxford University Innovation.

Around 80 guests attended the exclusive event, including investors, foreign embassy representatives and companies working in AI and robotics.

The series of House of Commons briefings have highlighted how Oxfordshire’s transformative technologies, alongside the county’s world-class research and development capabilities, could bring major global opportunities boosting the UK economy.

The county’s Science and Innovation Audit has suggested that four transformative technologies in-particular – connected and autonomous vehicles, space and satellites, technologies underpinning quantum computing and digital health – collectively has the potential to add up to £180billion GVA growth to the UK economy by 2030.

OxLEP’s first economic briefing took place in September last year, with a focus on connected and autonomous vehicles – highlighting global, Oxfordshire-based influencers Oxbotica and Street Drone – with a second briefing in January looking into the economic potential of space and satellites.

A third briefing – which looked into Oxfordshire’s digital health capabilities – took place in March, with a fourth focusing on quantum computing in May.

Nigel Tipple – Chief Executive of OxLEP – said: “The key message we will continue to take to Westminster is that Oxfordshire is very much open for business, particularly in-light of the recently-launched Oxfordshire Local Industrial Strategy, which has an aim of supporting the county to become one of the world’s top-three global science and innovation ecosystems by 2040.

“With a GVA of £23billion per annum, we are one of only three net county contributors to the Exchequer, with a track record of nurturing genuine innovation and taking it to a world-stage.