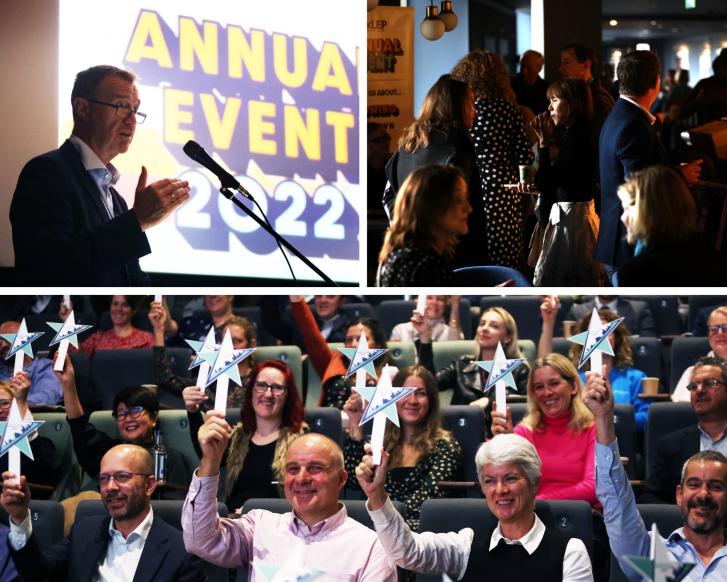 If you missed this month’s OxLEP annual event for 2022, which also saw the launch of next year’s Oxfordshire Apprenticeship Awards, you can now take a look at this special highlights film.

Dozens of Oxfordshire business leaders gathered on 1 November at the conference with a clear message from OxLEP – it is determined to support an even greater number of the county’s business population.

Following what has been another demanding and testing 12 months for business in Oxfordshire, the event saw over 125 people from across the county’s business community attend the event at the Curzon cinema in Westgate Oxford.

WATCH: OxLEP Annual Event 2022, including the launch of the Oxfordshire Apprenticeship Awards 2023

At the conference, OxLEP underlined its commitment to business and highlighted some of its key achievements during the past financial year.

They emphasised how they had directly supported over 1,500 businesses, as well as ensuring that just under 1,300 businesses were triaged to further business support – including grants, one-to-one advice and business recovery plans.

Following a successful 2022 event that engaged more businesses than ever before, the OxLEP Skills team also launched the Oxfordshire Apprenticeship Awards 2023 at the conference.

Fronted by award sponsors, the event’s business-led committee and previous Oxfordshire Apprentice of Year winners, the launch showcased the importance of apprenticeships to the Oxfordshire economy and wider labour market, as well as the opportunities that such schemes can bring to young people.