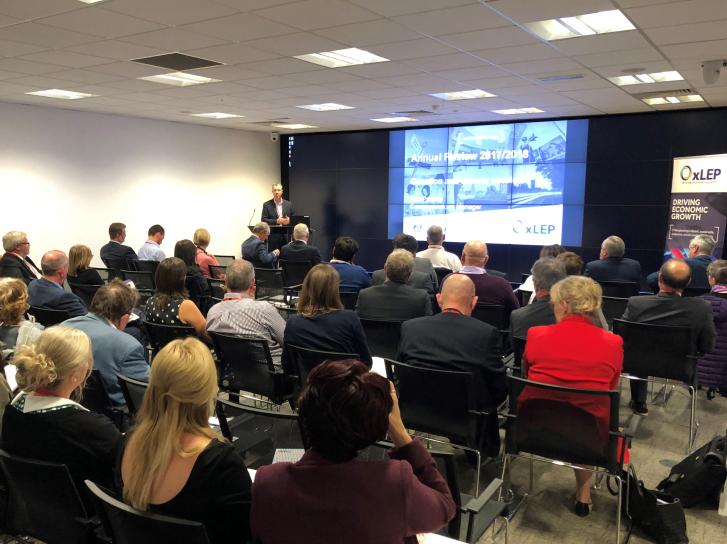 Some of the county’s leading businesses – as well as members of the general public – gathered at Harwell Campus for the Oxfordshire Local Enterprise Partnership’s annual review yesterday (25 September), reflecting on a ‘game-changing’ last 12 months for the county’s economy.

The event – which took place at the Satellite Applications Catapult – saw OxLEP update visitors on its current work and support programmes and also reflect on a year that saw developments such as the Housing and Growth Deal, as well as the Oxfordshire Local Industrial Strategy and the Oxford-Cambridge Corridor, emerge.

OxLEP also officially launched its annual report for 2017/18 and held a ‘market place’ event, where delegates found out more about its everyday work supporting economic growth.

Rob Panting – Communications Manager at OxLEP – said: “Engaging with our business community is vitally-important and our annual review was an opportunity for us to update businesses of all sizes – and the general public – of some of our achievements and the county’s economic achievements too.

“Over the next 12 months, we will continue to ‘take Oxfordshire’ to national and global audiences and demonstrate our track record of nurturing genuine innovation and taking it to a world stage.”

Nigel Tipple will be taking part in a Twitter Q&A next Tuesday – 2 October – between 12.30pm and 1.30pm. Send your questions to: @OxfordshireLEP or @NigelCEO  and add the hashtag #OxLEPquestions.

For more information on OxLEP’s next Q&A event – which takes place on 10 October at Witney Lakes Resort – go to the ‘events’ section.