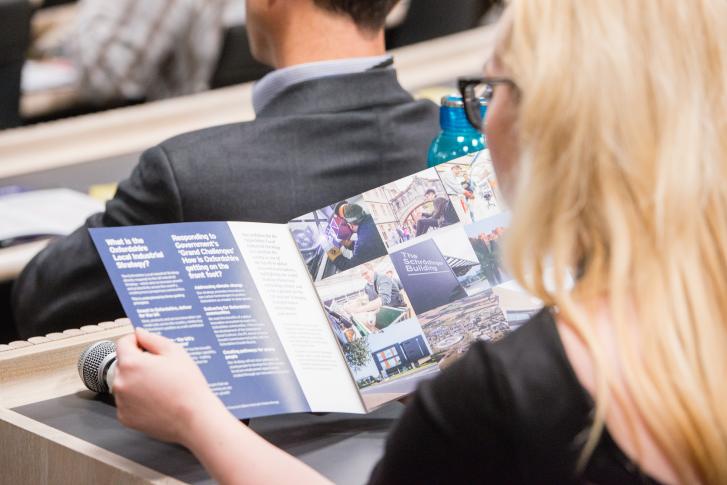 Senior business bosses from some of the most-dynamic companies in the county – alongside key academics and civic leaders – have gathered in central Oxford as a new and ambitious economic growth strategy for Oxfordshire, with the ability to ‘be at the forefront of a future, globally-facing UK economy’, was officially launched earlier today (4 September).

The Oxfordshire Local Industrial Strategy sees the county directly-respond to the UK Industrial Strategy, launched by Central Government in November 2017. It replies to the national blueprint, which aims to increase growth and productivity nationwide, as well as creating ‘more prosperous communities’.

The county’s Local Industrial Strategy was launched by the Oxfordshire Local Enterprise Partnership (OxLEP) at its annual event, held at the Blavatnik School of Government in Oxford.

Working alongside around 300 organisations – as well as Central Government itself – OxLEP have developed a strategy that aims to position the county as one of the world’s top-three ‘innovation ecosystems’ by 2040, led-by Oxfordshire’s global strengths in science and technology.

The strategy also hopes to build-upon the county’s recent economic growth performance which – between 2012 and 2017 – has seen a total of 50,000 new jobs created in Oxfordshire, this alongside an average five-year business survival rate of 49.3 per cent for those born in 2011, more than five per cent above the UK average, according to the Office for National Statistics.

The county is also one of just three net contributors to the UK economy, with a current GVA of £23bn per year.

It’s hoped that by 2040, not only will the county’s GVA potentially be doubled to £46bn per year, but for every £1 invested in Oxfordshire, £4 can be returned to the UK economy.

The Oxfordshire Local Industrial Strategy was originally published by the Department for Business, Energy and Industrial Strategy (BEIS) in late-July – today’s event marked the first opportunity for the county’s business community to learn more about the strategy in-person.

Jeremy Long – Chair of OxLEP – said: “Alongside our many key partners, we have created a highly-ambitious strategy for Oxfordshire to place us at the forefront of a future, globally-facing UK economy.

“It is a strategy that details how we can reach our full-potential, raising productivity and boosting our unique innovation assets.

“Importantly, the strategy is built upon input from our business community, recognising and prioritising local need, feeding directly into other key Oxfordshire strategies, including Oxfordshire Plan 2050.”

OxLEP added that the strategy aims to set ‘clear pathways’ for young people to develop the skills needed to secure employment opportunities within the county’s globally-competitive science and technology companies, as well as promoting innovation in low-carbon technologies, positioning Oxfordshire as a genuine leader in clean growth.

The strategy states that will be ‘inclusive, place-sensitive and sustainable, responding
to increasing concerns around climate change’ as well as ‘enhancing the natural environment and the quality of life for everyone in Oxfordshire’.

The strategy also sets-out how the implementation of new technologies can benefit people in Oxfordshire.

The strategy’s ambition is also to be enhanced by a number of key transformative technologies – all of which already boast significant national and international reach.

Nigel Tipple – Chief Executive of OxLEP – added: “Our four transformative technologies – namely connected and autonomous vehicles, space and satellites, digital health and technologies underpinning quantum computing – have the potential to add up to £180bn to the UK economy by 2030.

“These technologies are central to the evolution of the Local Industrial Strategy. As a county, we excel in them, they have global reach and they can act as a key driver for the UK economy, post-Brexit.

“No other part of the UK has the breadth and depth of assets, knowledge capability, skills and business capacity, which also makes Oxfordshire a leading location for investment, as well as having the genuine ability to attract the world’s most talented people.”

Find out more on the Oxfordshire Local Industrial Strategy