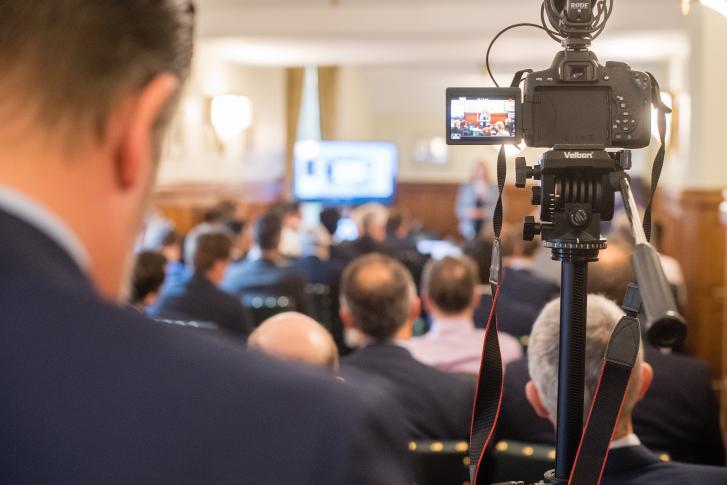 Above: Our first House of Commons economic briefing in September.

With the festive season upon us and with 2018 drawing to a close, we look back over the past 12 months, as well as what we could expect from 2019.

Our vision positions Oxfordshire as: ‘a vibrant, sustainable, inclusive, world-leading economy – driven by innovation, enterprise and research excellence’. I think it’s safe to say throughout the past year, countless successes have reiterated the contribution the county has made towards ‘UK PLC’, as well as our ongoing potential.

In February, a report released by Arcadis revealed Oxford as the second-best city in the UK for ‘growth potential’, highlighting the significance of the city’s economy and the ‘high-calibre’ proposition it offers to businesses and investors.

February was also the month in which the Housing and Growth Deal was approved by the Oxfordshire Growth Board, effectively rubberstamping £215million of Government funding over a five-year period.

This year has also seen our Local Industrial Strategy (LIS) begin to take shape. Our LIS is one of just three Government-backed strategies in the UK – responding to the challenge set by their own national Industrial Strategy – and focuses on the county’s key science and innovation strengths.

Alongside the development of this vital strategy, we have continued to work with partners – including other LEPs, local authorities and the private sector – to explore opportunities emerging from the Oxford-Cambridge Arc.

The National Infrastructure Commission reported that if fully-utilised, the Arc could be a major driver behind the UK economy and boost productivity through our knowledge-intensive cluster, competitive both nationally and globally.

It perhaps came as no surprise in July when we announced that Oxfordshire remains one of the 'most attractive locations anywhere in the UK' for international investment.

We revealed that – according to Department for International Trade statistics – 1,300 new jobs were created during 2017/2018 thanks to Foreign Direct Investment, a 122% lift on 2016/2017 figures, with the county’s emerging retail sector, including Westgate Oxford and Bicester Village, behind much of the rise.

Throughout 2018, we have continued to give Oxfordshire’s four transformative technologies, namely; digital health, space-led data applications, technologies underpinning quantum computing and connected and autonomous vehicles, the national profile it warrants.

In September, we took the latter technology to Westminster for our first-ever House of Commons economic briefing, hosted by Victoria Prentis MP. There, an audience made-up of key national and international stakeholders, saw at first-hand the scale of first-class research and development taking place in Oxfordshire – including a key note speech from Paul Newman of Oxbotica.

If fully-utilised, the county’s Science and Innovation Audit suggested the four technologies could be worth in the region of £180billion to the UK economy by 2030 – around six per cent of the global economy in these technologies.

Throughout 2018, we have also maintained our dedication to help start-up, growing and innovative businesses to flourish, as well as remaining committed to facilitating links between business and education.

Of course – going into 2019, one subject that will continue to be at the forefront of everybody’s minds will be Brexit.

As discussions with the European Union continue, many will be nervous and unsure as to what will happen next. However, one message we aim to get across is whatever ‘type’ of Brexit is eventually agreed; Oxfordshire’s economy is agile and high-performing – one of just three counties in UK offering a net contribution to the exchequer, with a GVA of £23bn a year.

Our business community has the ability to rise to against the potential challenges – in particular, our SMEs.

The latest Office for National Statistics figures for Oxfordshire showed that almost half (49.3 per cent) of the 2,790 new businesses launched during 2011 were still in operation in 2016 – this compared to a national average of 44.1 per cent. This, alongside the creation of 43,000 new jobs between 2011/12 and 2015/16, many of which generated by small businesses.

It is this ‘entrepreneurial attitude’ coupled with our ‘asset-rich’ economy that enables Oxfordshire to be recognised as world-leaders in many key sectors.

Our research and development strengths are genuinely world-class, so it’s unlikely to be of any surprise that we boast the number one-ranked Times Higher Education World University for a third year running, The University of Oxford.

It’s not just higher education that’s key in Oxfordshire. As I mentioned earlier, ensuring business and education work closely together is also hugely important too, promoting the benefits of apprenticeships and creating meaningful work experience placements for young people.

January will see our 10th Careers Fest take place, helping to facilitate those conversations between dozens of businesses and almost 2,000 young people. We will also showcase the county’s top apprentices and those running excellent training programmes at the Oxfordshire Apprenticeship Awards in April.

We will continue to take ‘Oxfordshire to Westminster’ with further House of Commons economic briefings scheduled for mid-January, March and the summer. We will also engage our SMEs through our popular Q&A debates – the next of which takes place on 19 February, entitled ‘Brexit and the Oxfordshire Economy’.

One thing we can count on as we settle down for Christmas and head into the new year is that 2019 will present Oxfordshire with many major opportunities on local, national and international scales – and these need to be capitalised on.

We wish you a very Merry Christmas and look forward to an exciting new year ahead.